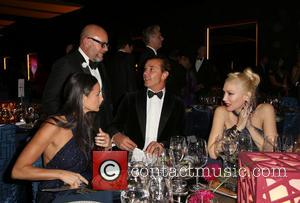 The Ghost star, who finalised her divorce from Ashton Kutcher in November (13), was spotted embracing the 27 year old during a vacation in Mexico in December (13).

The actress has yet to comment on the dating rumours, but Friday's brother, Jason, has confirmed the budding relationship.

He tells Star magazine, "It's going well. They are great and he seems really happy, so it's all good."

She was also engaged to Charlie Sheen's brother Emilio Estevez.