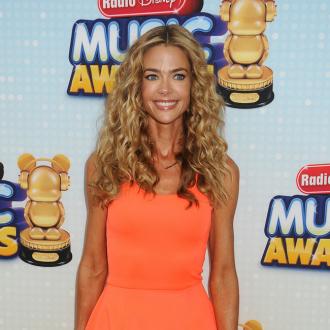 Denise Richards' father is caring for Charlie Sheen and Brooke Mueller's twins while the actress is away filming.

The 42-year-old 'Twisted' star's dad Irv Richards is taking care of her and Charlie's daughters Lola, seven, and Sam, nine, her adopted daughter Eloise, two, as well as the 'Anger Management' star's four-year-old sons, Bob and Max, with Brooke, while she is in New York working.

According to gossip website RadarOnline.com, the 63-year-old widower, who appeared in his daughter's reality show 'Denise Richards: It's Complicated' in 2008, took the children to a neighbourhood fair in Los Angeles on Saturday (11.05.13).

A source said the children appeared to be having a great time and were also joined by a nanny.

Denise admitted on Twitter that she was upset about missing Mother's Day today (12.05.13) with her children, writing: ''Quick 24 hr trip to NY to film an exterior scene for #twisted bummed to miss Mother's Day morning with the kids..grampa Irv is in charge (sic)''

Denise was granted temporary custody of the twin boys, with the full support of her ex-husband Charlie, earlier this month after they were removed from Brooke's care when she was placed under an involuntary psychiatric hold in hospital, amid allegations her drug use had resulted in an ''unsafe environment''.

The 35-year-old socialite, who is currently on her 20th rehab stay, tried to have her sons placed with her brother instead of with Denise this week but a judge denied her request.

A source previously said: ''There was no second guessing from the judge, Brooke's request was shot down. The twins will be staying with Denise Richards for the foreseeable future. Bob and Max won't be going out to Palm Springs to see her at the Betty Ford Clinic on Mother's Day, nor will her brother get temporary custody of them. Bob and Max are flourishing under the care of Denise, and the judge saw no reason to change that.''