Dennis Quaid's Viral Video Meltdown Has Been Exposed As A Skit For Comedy Website Funnyordie.com. 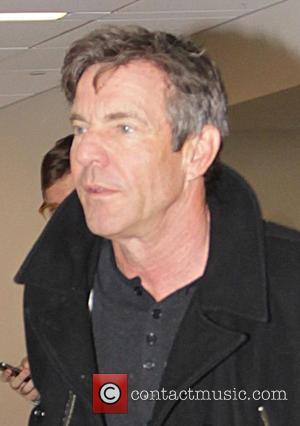 The Rookie star's emotional onset outburst was 'leaked' online at the beginning of the week (begs13Apr15), prompting bloggers and news outlets alike to speculate on the validity of the heavily-censored rant footage.

The full video has now been posted on FunnyorDie.com and features Quaid losing his cool while shooting a tense scene in a fictional drama when a man dressed as a penis wanders onto the set and starts chatting to the director.

An intern captures the fake meltdown on his cellphone camera as the actor rips into the crew, referring to the dressed-up extra as "Dopey the D**k". He then steps in manure on the set and yells, "This is horses**t!"

The rest of his rant is also cleared up in the footage he points at a group of extras dressed up as babies, a "bunch of pussies" refers to a basket of kittens and "this f**king baby" singles out a mother holding a newborn, who responds, "F**k you, Quaid!"

Backstage after the convincing outburst, a hairstylist takes a dryer to the actor's hair, prompting him to smile into a mirrors and state, "Sorry, I get grumpy when my hair gets flat!"

The skit concludes with the man dressed as a penis wandering into the actor's dressing room and attempting to start a conversation with the stylist, prompting Quaid to yell, "Hey d**khead, get the f**k out!"