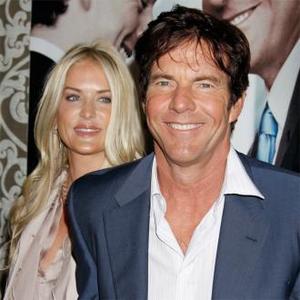 Kimberly Buffington-Quaid - who the 'Soul Surfer' star married in 2004 before going on to have twins, Thomas and Zoe, together in 2007 - filed for divorce in Texas in March citing ''conflict of personalities'' but has now changed her mind, according to TMZ.

The Travis County court clerk confirmed the ''notice of nonsuit'' was filed by her attorney on April 26. It is unclear if the couple have reconciled.

There is a temporary custody order in place which guarantees both parties access to their children, while Kimberly will keep the couple's main residence and Mercedes vehicle and Dennis gets a beach condo and Cadillac Escalade.

While Kimberly asked for the estranged couple's community assets to be fairly divided, it was reported that Dennis wanted his former spouse to receive ''nothing''.

Despite this apparent clash of opinion, the temporary order bans both parties from saying anything ''vulgar, profane, obscene or indecent'' to each other.