Derek Hough has a "severely injured" back which may mean he is not able to perform on 'Dancing With the Stars' tonight with his partner Amber Riley. Derek Hough is suffering with back problems.

Hough, according to sources speaking to E!, is in a great deal of pain owing to a back injury. A source close to the dancer said "His back is hurt. He's getting treatments now." However, the source also stated he is "not doing the dress rehearsal" which may mean he will not be able to perform.

However, this may be a case of mind over matter as Hough is insisting he is able to dance. Despite his determination he may not be permitted to appear as he needs medical clearance. Should Hough's doctor feel he is not up to the physical strain, Riley will be dancing with Harry Byalikov.

Hough referred to his injury on Twitter. On Sunday 27th he posted a photograph on Twitter of his back. A large needle can be seen pressing into his skin, probably injecting cortisone into the affected area. Hough added the comment "So this is happening - ouch!" 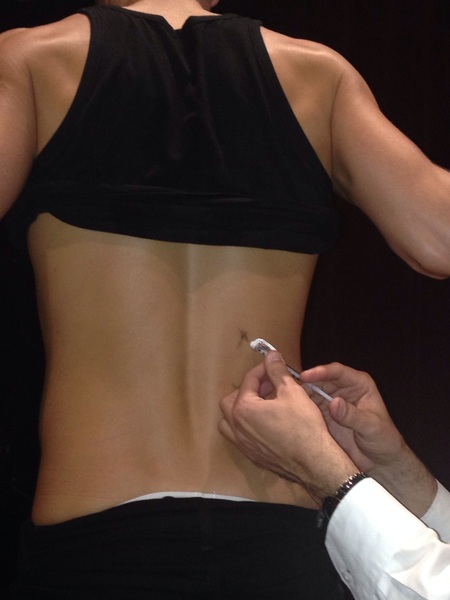 This appears to be a chronic and pre-existing condition probably dating from Hough's dance with Shawn Johnson late in 2012. A source speaking to Us Weekly, who first reported Hough's injury, said Hough's "back is severely injured - he had a pre-existing injury. He hurt his back dancing with Shawn Johnson, and he re-injured it dancing with Amber. He is determined to push through but not sure he'll be able to."

Hough is not the only one in his family to be attracting media attention this week. His younger sister Julianne Hough made headlines last week when she appeared in blackface at a Halloween party. She has apologised for the incident yet is still attracting criticism. Her brother has not commented publically on her costume decision. Derek and Julianne Hough have both made headlines this week.