Derek Hough has been spotted cosying up to Katherine Jenkins during a dinner date in London for which the pair were joined by Kelly Brook. 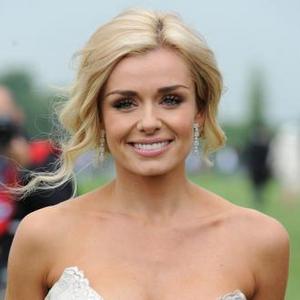 Derek Hough went out with Katherine Jenkins and Kelly Brook in London on Wednesday night (20.06.12) - and was seen cosying up to the Welsh Opera singer.

The 'Dancing With The Stars' professional dancer - who dated Cheryl Cole after her divorce from husband Ashley Cole in 2010 - hit the town with blonde beauty Katherine and the 'Piranha 3D' actress with the trio going to dinner at HIX Restaurant at Brown's hotel.

Derek and Katherine have reportedly been dating since being partnered together on the last series of 'Dancing with the Stars' and the pair did nothing to dispel romantic rumours.

An onlooker told the Daily Mirror newspaper: ''Understandably, Derek looked pleased to be there. He's obviously doing something right.

''He and Katherine are clearly close, they were in the restaurant for hours and were giggling together the whole time.''

Derek, 27, Katherine, 31, and Kelly, 32, were laughing throughout the meal and the male diners were transfixed by the two beauties.

The onlooker added: ''It was a very eye-catching group, there was hardly a bloke in the restaurant not looking over at Katherine or at Kelly, it was every man's dream dinner date.''

Kelly has been in a relationship with Thom Evans since December 2010.