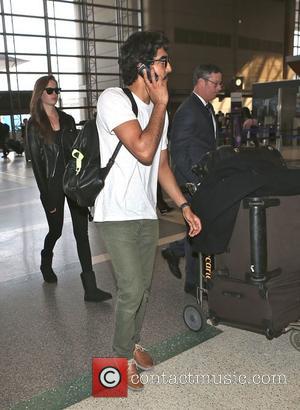 Picture: Shots of British actor Dev Patel who famously starred in the hit movie 'Slumdog Millionaire' as he arrived for his flight at Los Angeles International...

Actor Dev Patel was left stunned after famed photographer Mario Testino confronted him about his relationship with Indian beauty Freida Pinto at the beginning of their romance.

The Slumdog Millionaire star met Pinto on the set of their Oscar-winning film in 2008 and they began dating a year later, but there were some who weren't convinced the unlikely couple should be together.

In an interview with U.K.'s The Guardian, Patel recalls, "I remember going to this one Burberry show, and it was exciting. They've always been very kind to me and, even as a gangly guy, I felt I was rocking their suits.

"So when I was invited to one of the fashion shows in London, I went. Even though I had this preconceived notion - 'I'm not going to fit in with this crowd, it's going to be intimidating.' I was sitting there, and this fellow (Testino) says, 'Are you the one dating Freida Pinto?' And I'm like, 'Yeah, I guess.'

"We are incredibly close. She's just a really generous, patient human being who has been one of the most impactful people on my life. A lot of my motivation has come from her, from being with her and knowing her."