By Lauren James in Music Reviews on 10 November 2014

Long before Devo taught the world how to 'whip it real good' and spawned the niche trend for sporting energy domes - and Mark Mothersbaugh's own line of eyewear - the electro-rock experimentalists were mere tadpoles on the scene, honing their eccentric sound and playing dive bars across the US. Now seventh and latest live album 'Miracle Witness Hour' promises to take fans back in time to those early gigs with an intimate recording from a 1977 performance at the 'biker bar turned total dive': The Eagle Street Saloon in Cleveland, Ohio. This was Jocko Homo and Mongoloid-era Devo; reckless square pegs with a penchant for quirky, avant-garde pop and a short while away from David Bowie's declaration that they were 'the band of the future'. 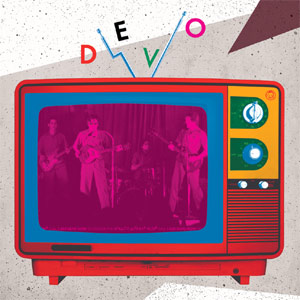 A dated recording lends an invitingly DIY aesthetic to the collection of imperfect renditions of the aforementioned classics, plus choice favourites 'Polyvinyl Chloride', 'Be Stiff' and 'Secret Agent Man' stand proudly out of the shadow of the arguably more radio-friendly later hits. The raw and unpolished songs are tinged by the punk and surf rock of proto-Devo, as best appreciated on the beach bar crackerjack 'Praying Hands' and the shouty, frenzied 'Huboon Stomp'. A polite yet sparse smattering of applause marks the end of each song, and illustrates a group doing what they would be defined by: revelling in the periphery, pushing sonic boundaries, and throwing everything at their live shows, unconcerned with chart appeal, crowd sizes or whether they ever attained platinum status.

Some bands release live albums as a half-assed stop-gap with little thought having gone into the execution: not Devo. Released by Futurismo, 'Miracle.' boasts retro artwork and an inner sleeve containing rare images and lino notes from founder Gerard Casale, as well as funky coloured records for the vinyl fans. The collection makes a compelling introduction to the eclectic Devo sound for the uninitiated, as well as being a die-hard spud's tribute to the shape-shifting Ohio foursome who, after 41 years and countless line-up alterations, and amid a climate of chart music riddled with banal synthpop and auto-tuned popstars, is thankfully still flying the flag for wacky tunes and genre-evasion. "As an original member of Devo, Bob Casale was there in the trenches with me from the beginning," Gerald said in a statement. "He was my level-headed brother, a solid performer and talented audio engineer, always giving more than he got. He was excited about the possibility of Mark Mothersbaugh allowing Devo to play shows again. His sudden death from conditions that lead to heart failure came as a total shock to us all." Though he deflected attention towards his brother, Bob played on every single Devo album and was instrumental in their production. Here's 5 facts about Devo that you never knew. Or maybe you just needed a reminder.

By Victoria Pavlova in Music / Festivals on 19 February 2014

Devo vocalist and founder Bob Casale died Monday from “conditions that lead to heart failure,” the band has announced on their Facebook page. Casale was 61. Casale joined the band at its beginning, after Gerald Casale founded Devo with Mark Mothersbaugh when they were students at Kent State University in the early 1970s. Bob was recruited by his brother, along with Mothersbaugh’s brother, also named Bob (Casale was referred to as Bob 2 to differentiate). Devo were known for their quirky musical style and excellent taste in head gear.

Together, the four musicians crafted Devo’s signature synth pop and rock sound, mixing kitsch science fiction themes with social commentary and satire. Casale served as the band’s guitarist and keyboardist, while also helping in the production of many of the songs. He added the signature discordant keyboard to the band’s greatest hit – the 1980 single Whip It. Devo officially broke up in 1991, but continued to tour on and off for the following two decades. In 2010, the band released Something for Everybody, its first new album in 20 years.

Tributes are being handed out for the late musician

Devo’s drummer Alan Myers has passed away from cancer, the band confirmed on their website. Myers sat on the drums during Devo’s pomp, rattling the toms for their 1980 mainstream hit "Whip It."

"I think he probably influenced a lot of drummers that are out there now because he was really great at being very precise and minimalist," Mark Mothersbaugh, the singer and founder of Devo, told Reuters."His minimalist style really suited what we were doing well," said Mothersbaugh, a founder of the band. "We always regretted it when he left." Their website, Club Devo, posted an entry titled: “DEVO MOURNS PASSING OF ALAN MYERS”. In it, they said: “DEVO mourns the passing of our friend Alan Myers, DEVO’s most well-known drummer who died June 24, 2013 after his battle with cancer.”

Alan Myers, who was drummer on Devo's most successful albums, has passed away at age 58 after a battle with cancer.

You may have not been able to tell them apart in their identical suits and energy dome hats, but US new wave band Devo lost their most prominent drummer, Alan Myers, to brain cancer on 24th June. Myers joined Devo in 1976, replacing lead singer Mark Mothersbaugh's brother, Jim, and preceding David Kendrick. Devo founder Mothersbaugh has paid tribute to the band's former drummer in a statement on Devo's website: "Alan Myers' metronomic drumming style helped define the sparse machinery rhythms that were a signature of our band's early sound." Bass player Gerard Casale mourned: "In praise of Alan Myers, the most incredible drummer I had the privilege to play with for 10 years. Losing him was like losing an arm. RIP!!! Myers is one of SPIN's greatest alternative drummers of all time, featuring on Devo's 1978 debut album Q: Are We Not Men? A: We Are Devo and remaining sticksman for six records until 1984's Shout, gaining an all-time hit with track 'Whip It' from 1980's Freedom of Choice.