Diana Ross Joined By Family On Stage At The Hollywood Bowl 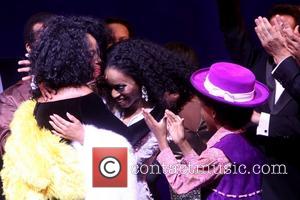 Superstar Diana Ross turned her Hollywood Bowl concert into a family affair by enlisting her daughter Tracee Ellis Ross to act as emcee, while Rhonda and Evan Ross performed as their mother's opening acts.

The Supremes star took to the stage in Los Angeles on Saturday (03Aug13) and thrilled the audience, which included pregnant actress Halle Berry and her new husband Olivier Martinez, with a string of hits and five costume changes.

The 69-year-old music legend brought the 75-minute show to a close with a rendition of Gloria Gaynor's I Will Survive and invited her family members back onstage for a final goodbye.

Speaking after the show, Tracee revealed she was delighted to take part in the concert with her mother, telling Etonline.com, "Tonight there was this full-circle experience to be apart of what we grew up watching our mom do. To be a part of it in that special way was kind of magical."

Evan, who will launch his own music career later this year (13), adds, "It was fun!"