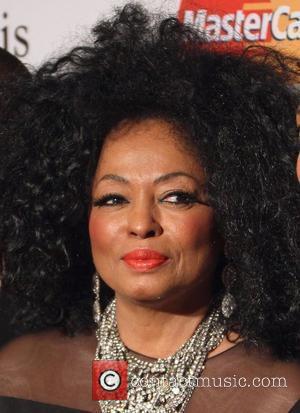 At Saturday's Grammy Special Merit Awards ceremony (February 11, 2012), Diana Ross was awarded with a lifetime achievement award. But the 67 year-old former Supremes leader said that she thought she should get an award for being a mother. According to the Washington Post, Ross accepted the award and took her five children and one grandchild onstage with her, saying "it's been the most incredible ride" and added "I'm very happy, very excited. I look forward to the future - and going into the studio to make new music."
Diana Ross also took time to remember the late Whitney Houston, calling her "a gift from God" and according to Hollywood Life, said that she had "the greatest voice in the world. At the pre-Grammys party, held at the Beverley Hills Hilton hotel where Whitney Houston was found dead yesterday, Clive Davis paid tribute to his former colleague and said "I don't have to mask my emotions. Not in front of this room, so full of so many dear friends. I do have a very heavy heart and I am personally devastated by the loss of someone who has meant so much to me for so many years."
Other artists joining Ross in obtaining a lifetime achievement award were GIL SCOTT HERON, Allman Brothers Band, Glen Campbell (to whom tribute was paid at the main Grammys event, by Taylor Swift, Blake Shelton and the Band Perry), George Jones, The Memphis Horns and Antonio Carlos.