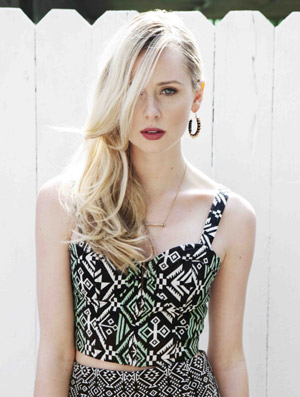 One of the most unique talents to come from X-Factor and now, after a brief hiatus away from pop, Diana Vickers is back with a new worldwide record deal and brand new single.

"Cinderella' is about being in love and not caring about any of the material things in life, just wanting to be with that one person you adore," explains Diana.  "It's about being prepared to lose anything and take every chance to be with them. It's a play on the classic 'Cinderella' story but in this version she's fallen for her prince so much she would lose both her shoes on purpose if it meant she could win him."

21 year old Diana recently signed a new record deal with independent label, So Recordings. Diana's second album Music To Make Boys Cry will be released by So Recordings in the autumn. The album includes songs produced by David Gamson, Simen Eriksrud and Ant Whiting in London, LA and Norway.

Music To Make Boys Cry has been A&R'd by Miranda Cooper who was the songwriting force behind many of the Girls Aloud and Sugababes hits.

"Cinderella was one of the songs to come out of my first sessions with Miranda in Oslo.  I ended up making the album that I consider to be a body of work that shows the real me.  The past two years have been incredibly important for me giving me the time and space to develop and work with writers. It was my partnership with Miranda that really helped me find and shape my sound."

Diana's debut album Songs From The Tainted Cherry Tree, released on RCA records in 2010 hit #1, and included production and co-writes with artists including Ellie Goulding, Dev Hynes, Nerina Pallot and Starsmith. The album also included her #1 debut single, Once.

Over the past year Diana has been touring up and down the country testing out new songs. She will be back playing live shows in the run up to the album release - dates to be announced.