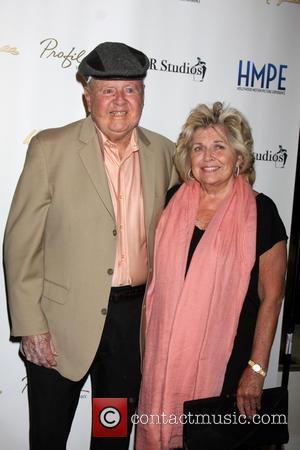 The actor died on Tuesday morning (23Jun15) at the age of 86 after suffering from complications linked to diabetes, and Buckley, who appeared as his character's second wife in the long-running U.S. show, has now memorialised her friend in a piece for the New York Post.

In the article, actress/singer Buckley remembers her time on the show with Van Patten and brands his death a devastating loss for all the actors who were part of his TV family.

She writes, "I heard he'd been having health problems, but when he and (his wife) Pat came to my concert in L.A. this past January, he seemed great. He was cheerful, buoyant, loving and funny, the way he'd always been. It was the last time I got to see him. Grant Goodeve, who played the oldest Bradford son, David (in the show), sent us all a beautiful email Tuesday after hearing the painful news of DICk's death. He ended it by saying, 'Thank you, DICk, for showing us what it was to be a good man'.

"DICk was a true father, not only to his three sons, Nels, Jimmy and Vincent, but to our TV family as well. Years after Eight Is Enough ended its run, he continued to be both guide and friend. I love you, DICk. I'm so grateful for your presence in my life and heart, and will always treasure being your television wife for a time."