Review of A Celebratory 50th Anniversary Album by Dionne Warwick

What feels like a squillion years ago in that fuzzy pre-history before MTV, they had an acronym for music like this, songs which were tailored for audiences which were generally considered less receptive to new ideas: those three letters were MOR, and it was an abbreviated version of the phrase "Middle of The Road". 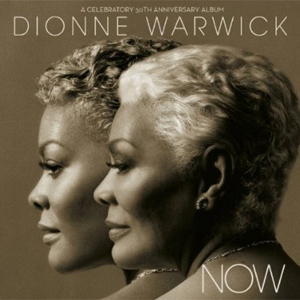 At its core, MOR existed as an antidote to the youth fixated world of contemporary pop, a place of sanctity for those who regarded the constantly shifting boundaries of taste as another listener's problem. Aside from a short fetishistic dalliance with it as a mainstream form in the mid 90's (remember The Mike Flowers Pops covering 'Wonderwall'? Thought not!), the two worlds have been drifting further apart ever since John Lydon first blurted out 'God Save The Queen'.

Dionne Warwick should need no introduction though, regardless of your vintage or inclinations. As one of the first wave of black American singers in the early sixties, she was in the vanguard of changing the way we consume music forever: the lineage may be less obvious, but without her and the likes of Aretha Franklin, your Winehouses and Adeles might never have had the female role models necessary to inspire them into picking up a hairbrush and bogle into the mirror.

Now celebrates a staggering fiftieth anniversary for Warwick as a performer, a career with its foundations in a fruitful period of collaboration with legendary MOR composers Burt Bacharach and Hal David, who first discovered her as a teenager in New Jersey. Refreshingly, where a simple chronological retrospective might have been the unimaginative way to go, the singer has chosen instead to reinterpret a clutch of her old songs, plus one each of Bacharach and David's back catalogue respectively.

The results are so MOR, they've got road paint on their metaphorical backside, hardly a surprise given the songwriters, but the feeling that the listener is ringside at a Vegas tribute concert is almost inescapable. Every track is wrapped in syrupy over production, from the cloying re-tread of her first hit 'Don't Make Me Over' to the string and piano laden schmaltz of 'I Just Have To Breathe'. Perhaps ironically - although irony is the quality this collection has the least of - it's 'David's 99 Miles From LA' that has the most appeal; its slap bass and preening orchestration offering something fractionally different to the forest of cheese which surrounds it.

Respect is something each successive generation is accused by the ones before of lacking. It's worth stating for the record that such incredible longevity at a single purpose represents for Dionne Warwick or anyone in fact, an achievement worth saluting. But there is a 'but' and  Now's final couplet is sadly worth ignoring. A cocktail lounge version of 'Make It Easier On Yourself' only serves to underline the magnificence of the Walker Brothers version, but there can surely be no excuses for the atrocities committed to her 20th century classic 'I Say A Little Prayer' (yes - that one) in the name of modernity. It's a messy ending, one that pushes the project further towards the box marked irrelevant, but more tellingly suggests that after half a century, it may be time for one of pop music's most well-known icons to finally 'Walk On By'.