Review of Decent Work For Decent Pay Album by Diplo 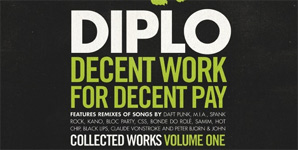 Diplo, formerly Diplodocus.no joke, has been doing the rounds both as a DJ and a Grammy Award nominated producer for awhile now. Known to his mother as Wes Pentz, he released his debut LP 'Florida' in 2004 and has been remixing for just about anyone since, releasing his own takes on the sounds of now, and building up quite a portfolio for himself I might add. He's also started and been running his own label Mad Decent and brought the baile funk sound to world. I've been following this particular dinosaur for some time now. I remember getting my hands on 'Florida' in 2004. A recording that is very of its time, cornered into one of the many hip-hop subgenres that was riding high in the early naughties. Back then his stuff was reminiscent of DJ Shadow, Blockhead, Dj Signify, et al. I enjoyed the album a lot but never really expected much of Diplo off the back of it. However he had, lets say, something of a severe change in direction, turning more to the dancefloor than the housebound musical elite. A good move I thought given that he definitely seemed to work better in that groove. Here on 'Decent Work for Decent Pay' we're showcased a selection of Diplo's own favourite output from the past 4 years or so.

'Newsflash' featuring Sandra Melody kicks things off, and if you ask me it was an odd move. Purely as it seems it is just a radio edit of 'Diplo Rhythm' from 'Florida', with a few tweaks here and there, but hardly different enough to warrant a new release. Don't get me wrong 'Diplo Rhythm' is and was an inspired track in 2004 and stands its ground today, but somehow giving it a slight dust off and a polish here and there for 2008 just doesn't sit well with me. Oh, and he's lost the Vybz Cartel & Pantera os Danadinhos who were as much a part of the magic of the original track as Sandra Melody.Next up Daft Punk's 'Harder, Better, Faster, Stronger' is subject to a realignment. It's has seen better days, but then I fail to see how you could better the original. Following that we see M.I.A's 'Paperplanes' being reduced to hip-hop standard featuring Bun B and Rich Boy on vocals. Now I can understand his pride in the original. After all it's what he got his Grammy nomination for, but Wes is being more than lazy just plastering some new vocals over the top, not even very good ones at that. Spank Rock 'Put That Pussy On Me' is next for the retouching, and I must say, well done indeed. This is the kinda thing I expect from Diplo and here he has managed to completely alter the vibe of this track, which is what any great remix should do. The guitar loop is sublime with a classic breaks sound to back it up.nicely done. Up next is Kano, time for me to put my preconceptions to one side.its not that I don't like Kano.no, wait, that's exactly what it is. Despite this Diplo's remix of 'Reloaded it' is a brilliantly commanding affair, with a wonderfully old skool skitty rave beat to distract from Kano's typical British rap vocal stylings. From here on in the album dips behind remixes, fresh Diplo tracks and reworks. Bloc Party's 'Where is home' shows us just what Bloc Party should be doing anyway, and in no uncertain terms blows the original effort out of the water. The Black Lips 'Veni Vidi Vici' is prepped for the disco, then packaged in a more minimal wrapping paper before being sent of to the music mills for spinning and weaving.

Now I'm conscious that if you're a fan of Diplo then you'll have either heard or already own all of these tracks. There's nothing on here that hasn't been doing the rounds already for awhile. This doesn't mean the tracks aren't good by any means. Most of them are decent party bangers, some are brilliant (the beats on the Bloc Party track are excellent, as is the vocal editing.) and some which, in my opinion could've sat this one out.So if you're a fan of Diplo, check the playlist, see if its worth your investment, and if you're not, then this is a damn good place to start. He does have his niche placed fairly and squarely in the fun side of the dancefloor. It might be best to think of 'Decent Work for Decent Pay' as a best of.Except, with a lot of the best stuff not on there. Then, this is just Volume One. I have better hopes for Volume Two.