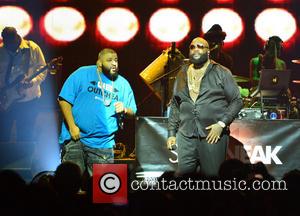 DJ Khaled has been threatened with legal action following allegations he plagiarised an album cover.

Rapper Kolley has accused the All I Do Is Win hitmaker of copying his debut album cover artwork, which features a close-up picture of the rapper's face with a gold chain in his mouth.