'Doctor Who' star Matt Smith had his face painted as a clown at the adidas Underground screening of Chemical Brothers film 'Don't Think' on Friday night (03.08.12). 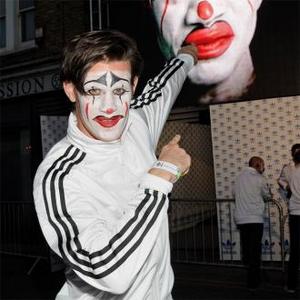 'Doctor Who' star Matt Smith dressed as a clown as he partied at a screening of the Chemical Brothers' film 'Don't Think' on Friday night (03.08.12).

The 29-year-old actor - who is to return to TV screens as the Time Lord in a matter of weeks - attended the special event hosted by adidas Underground and was more than happy to have his face painted and don an adidas Firebird track top to get into character for the theme of the bash.

The sports manufacturer created the official kit for Team GB with Stella Mccartney for the London 2012 Olympics and to celebrate The Games adidas is hosting a series of exclusive events at The Village Underground space in Shoreditch, east London.

There were numerous stars in attendance, including Jaime Winstone, Rosamund Pike and Plan B.

'Johnny English Reborn' star Rosamund arrived in a Pink wig and also had her face painted as a clown.

The 33-year-old actress - who gave birth to her son Solo, her first child with her long-term boyfriend Robie Uniacke, in May - was seen chatting with Matt and later on she took to the dancefloor as Chemical Brothers tracks 'Do it Again' and 'Hey Boy, Hey Girl' played.

Jaime and Plan B, real name Ben Drew, partied together and the

29-year-old singer loved the clown theme of the event.

She wrote on twitter: ''Crazy night ... Every person with a painted clown face. I had a wicked night #adidasunderground @adidasUK (sic)''