There are showgirls and then there's Dolly Parton; a larger-than-life, joyful megastar who is still concerned with impressing her fans and making sure every one of them feels included. As a sea of pink, fluffy cowboy hats and rhinestone-embellished denim vests filed into the new First Direct Leeds Arena on Friday night, it would be easy yet incorrect to dismiss Parton as a gimmick who only appeals to tipsy older ladies on a hen night. 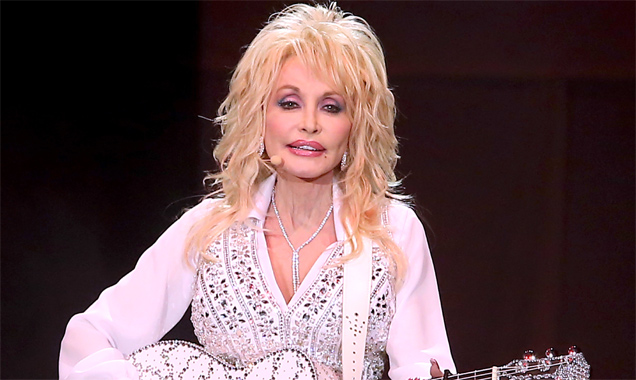 Eschewing any support acts for a two-part, gargantuan set to celebrate new greatest hits album 'Blue Smoke', Dolly struts out onstage wearing a glittering, corseted dress - armed and ready to give a country and western hoedown to remember. Splicing her 1978 hit 'Baby I'm Burning' together with Alicia Keys' 'Girl On Fire', Parton kicked off a riotous celebration of country, folk, bluegrass and pop.

Early sound difficulties make the first set of songs hard on the ears and the sound completely cuts out mid-way through 'Jolene', leading to farcical "we can't hear you!" chants from the audience and charades from Parton. The issues are soon rectified and brushed away, and another rendition of 'Jolene' is tacked onto the end of the set to much applause.

Disappointing sound quality aside, the queen of country music gives a regal yet eager-to-please performance, hopping between singing with an array of instruments, including acoustic and electric guitar, keyboards, autoharp, fiddle, dulcimer, harmonica, recorder and a mini saxophone. "I'm feeling saxy!" she cries, whilst wielding the latter; a comically small horn festooned with rhinestones that she professes to have glued on herself.

The Dolly in the media may be all bosoms, big hair and "Praise Be!" quotes, but it's easy to forget how her songs are so beautifully sculpted and woven with wisdom. Likening her peaceful homelands to "a baby's sigh" or reassuring that "old flames can't hold a candle to you", it's easy to see why the ebullient, backwards Barbie-cum-sage has earned the nickname "The Dolly Lama".

Dolly's family-oriented ethos and her Tennessean roots form a significant proportion of her vast bank of recorded material and her "dirt poor" but values-rich rural upbringing. 'My Tennessee Mountain', 'My Mountains, My Home' and 'Coat of Many Colors' are as touching and evocative as they've always been, Dolly's voice heavy with the weight of memory and eagerness to share her treasured childhood memories with every ear her voice touches.

Dressed in black, the six-strong band of musicians are merely adornments; a distraction that can be easily overlooked when Dolly commands the spotlight. Though their chill-inducing collective swell of country rhythm subtly directs the mood, they may as well have been the pit orchestra at a Broadway show about Parton's life.

Dolly's show is all about decadence but the sublime vocal a cappella solos of traditional  folk songs  'Little Sparrow' and 'Banks of the Ohio' show that, for all the glitz, glamour and showmanship, her unique, stirring soprano voice lies at the core of her multi-generational appeal. When her backing singers join her, it's hard to not be moved as three soulful, Americana voices take flight together.

Bon Jovi's once-cheeky 'Lay Your Hands On Me' is given a heaven-praising, gospel makeover to close the first half of the show. The second half of the show sees a new outfit for Dolly (more rhinestones, natch) and a heavier emphasis on the old school hits, including a medley of 'Old Flames Can't Hold a Candle to You', 'But You Know I Love You' and 'Real Love / Think About Love'.

'Silver Dagger' and 'The Bargain Store' are notable absences in the jam-packed set, which welcomes in new songs 'Blue Smoke' and 'Home.' Dolly's voice, although pitch-perfect, is let down by the entire performance's tinny sound quality. Equally, the generic, still backdrop images of candles, rail tracks or mountains become a little obsolete and even naff as the night wears on.

There's a lot that's unashamedly fake about Dolly Parton, but her nothing but authentic wise words and sunny, innocent charm only cements her universal appeal. There's a reason that her set's final songs '9 To 5' and 'I Will Always Love You' are her greatest hits: themes of love, ambition, sentimentality and hope transcend genres and eras in timeless defiance - much like Ms. Parton herself.