Q.1) Did Dolly Parton Mime At Glastonbury? Q.2) Should We Care?

Dolly's Glasto set has been mired in a "mimegate" controversy. 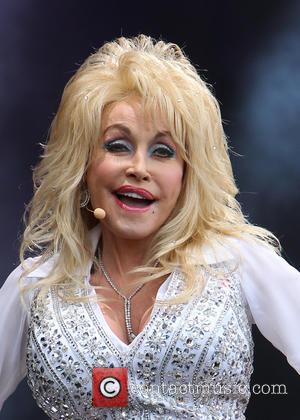 Dolly Parton has been hit with accusations that she mimed songs during her Glastonbury Festival performance last weekend. The 68 year-old country and western star topped off her recent UK tour to promote her new album, Blue Smoke, with a long-awaited appearance on the Pyramid Stage at the Somerset site.

However, her performance has drawn criticism from many who believe that the singer mouthed the words to a pre-recorded track onstage instead of singing live. In the face of the scrutiny, Parton's spokesman has responded with an outright denial: "No, she sings live," he told the Sunday Mirror. "Some people don't know an amazing singer when they hear one."

It was Kay Burley of Sky News who first decided to air her views regarding Dolly's perceived miming. "Oh, Dolly is miming. How disappointing," she tweeted, ahead of a string of similar sentiments from users of the social site. However, TV host Stephen Fry jumped to Parton's defence, blaming television-related delays for making it look like Dolly's sound wasn't synched.

"I think I know quite a lot about how TV is made. Why are people saying @DollyParton is miming? She's fooling me." he tweeted, adding "Believe me, that is not miming. If it appears not always to lip-sync that's an HD live processor issue. You see it with news reporters."

The belief that Dolly could have been miming could be rooted in her openness towards admitting in the past that not all aspects of her stage shows are live. "Yes, there are portions of the songs in the show that are prerecorded," she said in 2004 during her Hello, I'm Dolly tour.

"I tell you that at the beginning of the show when I say, 'If you notice some enhancement or doctoring in the show, it's not to fool or trick anyone. It's an effort to entertain by being able to have a bigger production and, hopefully, a better sound,'" she wrote in a statement on her fan site.

It's important to look at why so many take issue with an artist miming. Of course, an audience wants to feel that a show is live and that the artist performing before them has the talent to make their live performance sound good.

Nowadays, auto-tuning is endemic in the music industry, which means that a gig can be a chance for a singer to show off their unedited skills. Any sense of inauthenticity brings the artist's talent into question and can make the crowd feel like they're being lied to.

Despite her distinctive physical appearance, Dolly's voice has always been her greatest asset from when she was a teenager singing on television, later bolstered by her dazzling, inclusive showmanship. Her level of singing skill and songwriting ability shouldn't even come into question these days but, as the 70th birthday of one of music's hardest working performers creeps into view, we really wouldn't blame her for needing to take a day off. Dolly Parton Has Denied Accusations That She Mimed During Her Glastonbury Performance.