Tv Daredevil Matthew Pritchard Has Apologised To Dolph Lundgren For Urinating On His Feet During A Debauched Transatlantic Flight Last Week (Beg25may15). 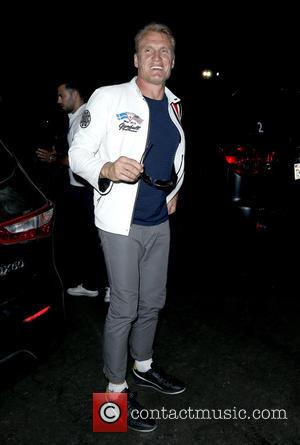 Rocky IV star Lundgren and several other competitors in the annual Gumball 3000 rally were jetting from Amsterdam, Netherlands to the U.S. on Wednesday (26May15) for the final leg of the annual rally when the journey degenerated into a raucous onboard party.

Welshman Pritchard, one of the stars of MTV stunt show Dirty Sanchez, was pictured stripping naked in the cabin and clambering over seats, but he has now apologised for his bizarre behaviour and blamed the incident on mixing alcohol with anti-anxiety medication.

He says, "I took a Xanax, which is a sedative that knocks you out, to put me to sleep on the flight. I didn't realise you're not supposed to mix them with alcohol. I had a lot of alcohol and blacked out. I started running up and down the flight naked. And proceeded to pee on Dolph Lundgren's feet... Apparently Dolph was not too happy... Afterwards Dolph shook my hand and said not to worry about it. I don't know why I wasn't arrested at the airport."

Pritchard also wrote on Twitter.com, "I've appologiesd (sic) to Dolph Lundgren and he accepted like a gent."

The 2015 Gumball 3000 rally kicked off in Stockholm, Sweden on 23 May (15) and took in trips to Germany, Denmark, and the Netherlands before transferring to the U.S. for visits to Los Angeles and San Francisco, California and a concluding weekend in Las Vegas.