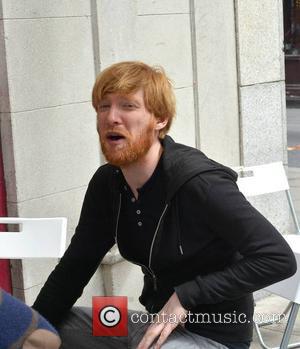 Actor Domhnall Gleeson relished his role in the Harry Potter finale because he had to announce the death of his real-life dad.

The Irish star played Bill Weasley in the final two Potter films and his proud father, Brendan Gleeson, admits he noticed the glee in his son's eyes when he learned he'd be delivering the line about his own character Alastor 'Mad-Eye' Moody's demise.

The veteran tells Wenn, "It was a dream come true for him!"

The Gleesons have teamed up again in new film Calvary, in which dad Brendan portrays an embattled priest - and they prepared for one tense confessional scene by not speaking to each other for a week.

The In Bruges star explains, "In the scene he was accessing a lot of stuff that was based in reality. We found we weren't really helping each other, so, for about a week we didn't really speak. We kind of went to our different corners in the ring. We sat at this table in the very centre of a huge cell in a jail.

"(In the scene) I knew I no longer had that particular son for that particular time, and I was in a rage about what I felt was his blase attitude and he wasn't sincere in his search for redemption and forgiveness. He didn't really give a damn about the people he destroyed. I was enraged by it.

"Domhnall said afterwards it was the first time he saw me in a bit of a state and he was determined to come back at me. For everything I slammed at him I got it right back in the face. It was fantastic. I know (writer/director) John (Michael MCDonaugh) was worried that we would take people out of the movie. The main thing is you don't want to be compromising the film: 'Oh, that's your son', you know. But even people who knew his work didn't recognise him. A lot of people were asking me afterwards, 'Who did Domhnall play?' It was a proper actor to actor, which was a great bonus."