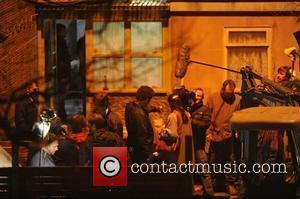 Picture: Dominic West and Monica Dolan make a grisly transformation while shooting Appropriate Adult, which focuses on one of Britain's most prolific serial killers, Fred West,...

Dominic West has won rave reviews for his role in Shakespeare's Othello after opening the show at his hometown theatre.
The actor plays villainous Iago in the production opposite his The Wire co-star Clarke Peters as Othello and they started the stage run in West's native Sheffield, England at The Crucible theatre, which his grandfather helped build.
The pair, who played fellow detectives in the hit TV show, both won praise from critics, with reviewers lauding West for stealing the show as the evil Iago.
In Britain's Daily Telegraph, critic Dominic Cavendish, writes, "The night belongs to Iago," commending West's "knack for evil" and adding, "He grins, he glints, he lets shades of the northern jester creep in - and you can see why everyone's his fool."
Michael Billington of The Guardian adds, "What is excellent about West is that he has a surface honesty that makes him grammatically plausible and that yields a lot of laughs," while The Independent's Paul Taylor writes, "With his forthright approach and strong Sheffield tones, he's like a deadpan whirlwind parody of the plain-speaking Yorkshireman... The actor's achievement is to marry this manner to the chillingly hypnotic, manipulative power and psychopathic emotional dissociation... There are moments here that freeze the soul."