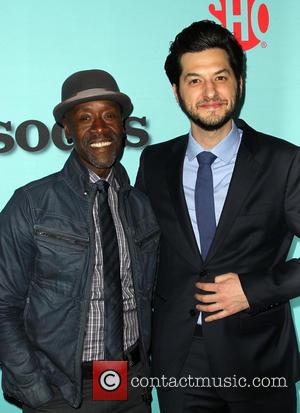 Picture: Don Cheadle and Ben Schwartz - Photographs as Showtime celebrated the launch of new seasons Of TV shows "Shameless," "House Of Lies" and "Episodes" The...

Actor Don Cheadle received a rude welcome at his first Academy Awards in the 1990s when he was shouted at by photographers to make room on the red carpet for Cher and Jack Nicholson.

The Hotel Rwanda star reveals he agreed to take his wife Bridgid to Hollywood's big night early on in his career after gaining widespread recognition for his role in 1995's Devil In a Blue Dress, but had to shell out around $500 (£313) per ticket - and was then subjected to some nasty comments from the paparazzi.

He recalls, "The first year (I went to the Oscars) I was asked to join the Academy after Devil In a Blue Dress, so you join and then you can get tickets to the Oscars, which means you have the privilege of paying like, $500 a ticket... If you're not invited, if you're not nominated that year, you can still go, but they hit you up (charge you).

"My wife convinced me to... take her to the Oscars just so we could have the experience, so we were just by ourselves, just the two of us.

"We were walking into the venue, on the red carpet, stuck between Cher's entourage and Jack Nicholson's entourage, which is not where you want to be, and both about 25, 30 people deep... We're getting elbowed, pushed, shoved. The paparazzi are going crazy, going, 'Cher! Jack! Cher! Jack! Jack! Cher!' The flashbulbs are going off and one guy sees me... and he goes, 'Mr. Cheadle, Mr. Cheadle! Don!' I looked up and he goes, 'Get the out of there!' So welcome to the Oscars!"