Protesters Gathered Outside A Studio In New York City On Wednesday Evening (04nov15) To Urge Tv Bosses To Dump Donald Trump From An Upcoming Appearance On Saturday Night Live (Snl). 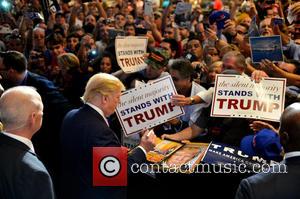 The Celebrity Apprentice star-turned-presidential hopeful is due to host the popular U.S. sketch show at the weekend (07-08Nov15), but his involvement has infuriated many critics.

Trump outraged swathes of the Latino community when he announced his 2016 presidential run by making a series of controversial comments about Mexican immigrants, and more than 522,000 of his opponents have signed a petition calling for his removal from SNL.

The petition was delivered to the NBC headquarters at the Rockefeller Center in Manhattan on Wednesday evening by a representative of immigration reform group America's Voice.

"It is shameful for SNL and NBC to think that racism can be repackaged as comedy," says Juan Escalante, Digital Campaigns Manager of America's Voice. "Moreover, it is disappointing to see that... the executives at NBC are willing to prioritize their ratings over the dignity and respect of their viewers... Trump's attacks on Latinos and immigrants are not funny."

TV bosses appear to be going ahead with Trump's appearance on the show, as the business mogul tweeted pictures of himself in the studio shooting promos for Saturday night's (07Nov15) episode.