A Lot Has Changed Since The Golden Days Of "Entourage"

The jury is still out on Entourage: The Movie.

In the light of news  that an Entourage movie is finally out, the internet is now wondering – is there any more story left to tell? Of course there are, according to creator Doug Ellin. The big screen version of the critical-darling-turned-nostalgia-watch show came out Friday and the critics are about to have their say.

Entourage was one of HBO’s highest-rated half-hour shows, and some seasons the highest, during its run, but viewership still just topped out at an average of 8.3 million (including on-demand and digital viewing) during Season 6. And its dismal performance in syndication, both on Tribune stations and later on Spike, raises a caution flag.

Continue reading: A Lot Has Changed Since The Golden Days Of "Entourage"

Kate Upton could play the female love interest in 'Entourage.'

Kate Upton, probably the biggest and most popular model in the world right now, is in early talks to play the female lead and possible love interest of Vinnie Chase (Adrian Grenier) in the now green-lit Entourage movie. Directed by series creator Doug Ellin, the movie is about to begin shooting with the original team - Jeremy Piven, Kevin Connolly, Kevin Dillon, Jerry Ferrara and Grenier - though the hunt is on for two things: a female lead, and a huge list of celebrity cameos.

"It's A Go": 'Entourage' Movie Is Full Steam Ahead

The US comedy series is to be turned into a movie, announces creator Doug Ellin.

The movie adaptation of the comedy-drama series Entourage is all set, two years after the show's eight season run wrapped in 2011. "It's a go. Love you all," the show's creator Doug Ellin captioned a photo of himself posing with members of the show's cast. Doug Ellin Is Ready For An 'Entourage' Movie.

Ellin's sudden announcement follows months of speculation over whether an Entourage movie was in the works and it was rumored that the movie had been delayed by lengthy negotiations with actors.

Continue reading: "It's A Go": 'Entourage' Movie Is Full Steam Ahead The 'Entourage' Movie Is Officially GO. Today Is A Good Day.

The 'Entourage' movie is confirmed.

Looks like Vinnie Chase, Turtle, Eric, Ari and Johnny Drama are getting the old gang back together. According to Jerry Ferrara, who plays the street-smart Turtle, the Entourage movie is officially a goer despite stories of unrealistic money demands. The Boys Are Back! Entourage Movie Is Confirmed

"I am proud to announce the #Entourage movie is officially a GO! Have to thank @wbpictures  and @HBO for all the support to make this happen!" he tweeted on Monday.

Continue reading: The 'Entourage' Movie Is Officially GO. Today Is A Good Day.

Mark Wahlberg has fanned the flames of excitement that lit yesterday in light of Warners announcing a film of HBO comedy Entourage, by offering further details on the project.

Wahlberg is one of the executive producers of the comedy, which ran from 2004 to 2011, and, as well as telling MTV that he’d be more than up for a cameo, he also let slip that filming was set to get underway this summer with a view to releasing the film in Spring 2014 – though earlier could be possible. “We always felt like it was a movie, but we had to just make these 30-minute episodes” Wahlberg commented. “That was one of the one of the frustrating things. It always felt like we left the audience wanting more, which is a good thing in doing television. I think its story and its characters were a world people really missed and really enjoyed.”

The show’s creator Doug Ellin is on board to direct the film, with the script already written, and talks are on-going to get stars Kevin Connolly, Adrian Grenier, Kevin Dillon, Jerry Ferrara and Jeremy Piven involved. Wahlberg said there were always plans to continue the show in some form or other. “Doug wanted to go off to do another show, and HBO liked the idea of doing it, but to have Doug actually have time to sit down and write the script ... I always knew the fans wanted a movie” he explained. “It just took a long time. It took a long time to get it written, get it right, and we got a fantastic script. Warner Bros. is very excited about it. All the guys are excited.” And so are we, Mark, and so are we.

Doug Ellin Back With Fiancee After Social Media Spat 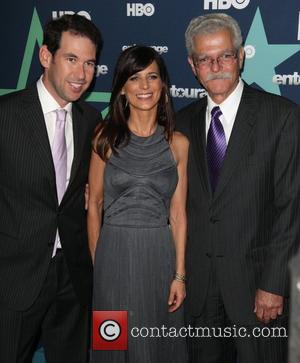 Doug Ellin Proposes With The Help Of Andrew Dice Clay