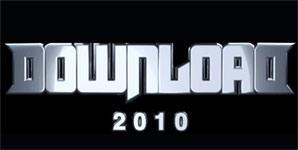 Despite the fact I was weaned on a steady diet of rusks and heavy metal, I've never been to Download before. I really didn't know what to expect. In truth, none of my expectations could have prepared me for what was coming. People don't just go to listen to music; people go to Download to go mental: Simple as that. They go to indulge in their strange and frankly, sometimes frightening fetishes, which for 362 days a year, they would be arrested for. It's quite literally a case of 'find a babysitter and dust of those ass-less leather chaps,' for some couples. Over the course of the weekend I see people wandering round with dildos on their heads, Hulk Hogan, the incredible Hulk (fat man painted green), and the poor man being de-kegged and whipped naked in time to Billy Idol's 'White Wedding.' On top of this, literally thousands of poor fashion choices: floor length leather coats, flaming New Rock boots, Murderdolls t-shirts, pink dreadlocks and lam' gold hotpants. Sometimes all on the same person. You couldn't make this up.

The first two days are spent basking in unpredicted, glorious sunshine. A wander round the site confirms that every inch of available space screams 'SPONSORSHIP,' but then, so does every other festival in the world. Apart from the odd Kerrang! and Metal Hammer tent, it's becoming increasingly impossible to distinguish where you might be. At Download, or drowning under a generic wave of Red Bull, Guinness, Tuborg and Jagermeister? I really wouldn't fancy that cocktail.

Luckily, Them Crooked Vultures are on hand to suspend consideration of this topic. We all know that "super" groups usually equal the death knell for credibility. Cue endless vanity tours and boring egotism. The difference with TCV is that this they just really, really want to prog out. And prog out they do. It's brilliant to see Dave Grohl behind a drum kit again, because you are reminded just how much of an unholy terror he is. Josh Homme provides the twisted top end, whilst rock-grandad John-Paul Jones just looks happy to have been invited. A motley crew to look at, maybe, but when they're making grooves this good, no one can touch them.

Where AC/DC store their stage when they aren't touring, I have no idea. It's as big as an aircraft hangar. Some might say that it's sheer extravagance to bring your own touring stage, crew and PA to festivals. But they are one of the biggest bands on the planet and tonight, the sound is phenomenal. It's crystal clear and sharp even when you're stood miles away (like us).

Of course it's silly. Angus Young is collecting his pension, yet doing scissor kicks and pulling his shorts down to reveal AC/DC knickers. Brian Johnson is swinging from a giant bell with a noose on the end (Hell's Bells, surprise!). The fact is, if they didn't have songs like 'Whole Lotta Rosie' 'Dirty Deeds, Done Dirt Cheap,' or they didn't sound as good as they did 2 decades ago, it would all be pointless. But AC/DC are every bit as audacious, fun and rock 'n' roll as they have ever been. They could have packed it in when Bon Scott died. But they came back with the second highest selling album in history. I sincerely hope they are still doing it on the wrong side of 90.

Saturday welcomes Leeds favourites The Plight, with their swinging, balls-out punk rock. They pack out the Red Bull tent, and single 'Ball and Chain' clears a 20 foot circle pit in the crowd (what else). At a festival littered with All-American Douchebag phrasing such as 'Donington, are you ready to shred shit up?' and 'England, it's about to get HEAVVVVY!' it's nice to encounter a good English band with a wry sense of humour; it's also funny to see Alstair Mancreif pretending he meant to fall over his own legs.

Looking at Deftones, it's sometimes easy to forget they've been around for a time. Especially given how a very slim line Chino Moreno bounds around the huge stage. But before they launch into closer '7 Words,' from Adrenaline, he stops to remark 'wow, this song is 20 years old.' 2 decades have gone by, but there's still nothing "vintage" about them. Maybe it's because new LP Diamond Eyes, is as the title suggests, sparkling and fresh. The new songs they debut: 'Beauty School,' 'You've Seen The Butcher' and 'CMND/CTRL' slot into their set in terms of quality, alongside 'Be Quiet And Drive' and 'Passenger.' Deftones have always been the metal band that invited you to engage with their music on a deeper level, and perhaps this is why they don't quite fit the peg of a Download main support. At any rate, without getting too superior, they are still here and still towing the line between brutal and beautiful. You'd be mad to cast them aside with the nu-metal fall out.

Whilst we're on the subject of nu-metal, here comes the band that spawned a thousand (c)rap/rock bands. And to boot, just about every annoying, snot-nosed 'anti-capitalist' you've ever met. Yes, it's Rage Against The Machine. They may have a lot to answer for, and you could have the idea of turning your nose up at Zack De La Rocha & co. But to be honest, as the air raid sirens sound and the opening riff to 'Testify' kicks in and then he's spitting down the mic: 'the jury's sleepless/we found your weakness/and it's right outside the door!' No one cares! Everyone is too busy being embarrassingly ghetto.

The complete lack of political agenda in the crowd is something Zack should have taken note of as he begins his ten minute tirade about Israel and Simon Cowell (both equally evil, apparently). It's Rage, though. You can forgive all the crap when they roll out 'Wake Up' and 'Bullet in the Head.' Of course they finish on 'Killing in the Name Of,' and the Irony Police come to arrest everyone who bought the record because they were told to. Good night.

Sunday is the day of complete 80s cock-rock, and Download have elected to include everyone who was there, regardless of quality. So, when the mighty Saxon have finished, and Cinderella's botched Botox yawnings begin to put me to sleep, I stroll over to catch Napalm Death, just for the fun. I arrive just as they introduce cover of Dead Kennedy's 'Nazi Punks Fuck Off,' which lasts a glorious 30 seconds. Who the hell listens to them every day I don't know, but they're pretty unforgettable experience in the flesh. 10 minutes and 15 songs later, my internal compass is pretty much broken.

Just as the always dependable Billy Idol mounts the main stage, the heavens begin to open. It was baking sunshine twenty minutes previous, and now it's a biblical flood. This is truly the English summertime. A professional showman like Mr. Idol doesn't let it faze him though, apart from exclaiming 'what a fucking way to take a bath!' he is gurning and crooning like a good 'un. He's actually a brilliant act to have on in this situation, because I don't know many other songs you would be prepared to dance in the pouring rain to like 'Rebel Yell.' By the time he's played 'Dancing With Myself,' 'White Wedding' and 'In the City' you realize that pretending to be a punk for so many years has probably been quite lucrative. A cheesy, enjoyable way to wrap up a weekend which has not been short on guilty pleasures.