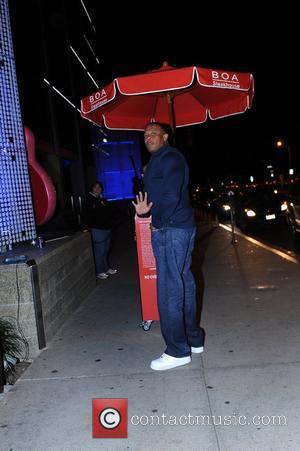 Dr Dre gave his first live television performance in ten years when he joined Eminem on-stage at last night's Grammy Awards.
DR DRE, the American rapper and producer, performed his new track 'I Need A Doctor' with EMINEM and SKYLAR GREY at last night's (13th February 2011) 53rd GRAMMY AWARDS in Los Angeles.EMINEM was first joined on-stage by Rihanna and Maroon 5's Adam Levine for a stripped down version of the hit song 'Love The Way You Lie'. SKYLAR GREY, who penned the track, then appeared on stage and launched into a rendition of DR DRE's 'I Need A Doctor' from his forthcoming album 'Detox'. Speculation that Dre and EMINEM would perform together had intensified before the ceremony and the rumours were proved to be true as the legendary rapper and producer appeared on stage for his first live television performance in over ten years.
DR DRE's forthcoming third album 'Detox' is scheduled to hit shelves on 1st April 2011. The record was initially due to be released in 2004, but Dre wanted to concentrate on producing artists on his 'Aftermath Entertainment' record label.