Drake - If You're Reading This It's Too Late Album Review

Drake is set to release his mixtape 'If You're Reading This, It's Too Late' in March 2015, through Young Money/Cash Money Records. Being so influential in terms of the hip-hop industry, this surprise release has already blown his last album out of the water. It has broken the record for the most-streamed album in its first week on Spotify. 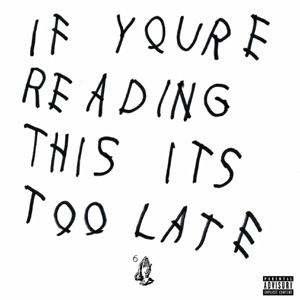 Some tracks suggest Drake is reacting to current events in his personal life, exuding atmospheric, dark and nocturnal vibes. But while the seventeen tracks included are not really approaching any new topics that haven't been addressed before in various releases, there are some memorable lines within some tracks. He talks about how he has to act like he likes his fellow rappers, and how his acting days are over now.

Drake is very in tune with his emotions, and doesn't adhere to the 'macho' aesthetic of most contemporary hip-hop artists. His previous album, 'Thank Me Later', was very love-song orientated in comparison with this release. He is starting to sound more aggressive and intense, giving much more energy and a certain hunger to proceedings. There's a thin and careful beat to 'Legend', a song of confidence in his own legacy. Although it is a very minimal track, it picks up gradually and opens the mixtape in flawless fashion. 'You & The 6' is far more nostalgic and heartfelt, as he is rapping directly to his mother. It is slow paced, which matches the tone perfectly and strengthens the audibility of the lyrics. 'Company' shows him to be unworthy of a real loving relationship and is another very meagre track, with a dark vibe to it, which only supports the lyrics. 'Used To' is talking about Drake getting used to his fame, as even at his highest points in music there is still some awkwardness where it doesn't really feel as though he belongs. It has a forceful beat, and with Lil Wayne contributing to the track, it comes across as though they are trying to make this particular track a powerful one in comparison to the others. He should instead be more open about his insecurities rather than swinging back and forth from giving too much, to not enough in his music.

'Star 67' includes numerous technology metaphors, rapped along to a very slow yet thought-provoking beat. 'Energy', 'Know yourself' and 'Preach' have great hooks, and much more hostile flows by Drake's standards. 'Know Yourself' begins with a spoken recording, adding more raw appeal. The chorus here in particular is nice to listen to, with its distinctive electro beat. His approach to songwriting uses reasoning more often than aggression: who is bigger, who is better? He doesn't tend to be irrational. '6-god' has a simple sound to it, but it fits in well with the overall underdone feel of this collection. 'No Tellin'' has another favorable beat to it, showing Drake to have relied more on the musical side of the track rather than the lyrical flow.

'Legend', 'Madonna' and 'Jungle' are not horrible tracks, but they are very repetitive and make for rather unnecessary fillers. They are catchy and a good listen, but are a little bit in the way of emotional baggage. However, 'Jungle' is the better of the three, with Drake's singing providing an enjoyable chiller vibe.

All in all, 'If You're Reading This, It's Too Late' is simple, straightforward, confident and braggadocios, and certainly an improvement for Drake. He has taken this opportunity to shake off the less than macho label, and has really portrayed himself as an assertive performer within this mixtape.