It was a toss up between this and Metallica's cover, but in the end we decided that Thin Lizzy definitely takes the biscuit with their 1972 release and first big hit. The band may not have been thrilled with the release at the time, but it topped the chart in Ireland and hit number 6 in the UK, even landing them a spot on Top of the Pops.

They've done many rock versions of Irish folk songs but this is by far our favourite. Released in 2002 on their third album Sing Loud, Sing Proud!, this was the release that truly introduced their Irish-inspired sound and made them a St. Patrick's Day staple. The Celtic punk rockers are streaming their annual St. Patrick's Day show today, because they'll be damned if anything stops them performing.

Possibly one of the most beautiful covers of Molly Malone ever recorded was by Irish vocalist Sinead O'Connor. Again, this is by far not her only take on a traditional Irish ballad - she's been singing them for decades - but it's one of our favourites on the series of covers she did on 2002's Sean-Nós Nua album.

4. The Parting Glass - The Wailin' Jennys

Speaking of beautiful covers, this Canadian trio will take your breath away with their rendition of The Parting Glass from their debut full-length album 40 Days. Granted it's TECHNICALLY a Scottish tune, but as Irish and Scottish traditions share many similarities, we're still going to include it.

5. The Rocky Road to Dublin - The Chieftains ft. The Rolling Stones

The Chieftains are one of Ireland's most famous folk bands (probably second only to The Dubliners) and thus they've performed with a great many artists in their time. If we have to choose one though, we're extremely fond of their collaboration with The Rolling Stones on The Rocky Road to Dublin which appears on their 1995 album The Long Black Veil.

Again, not strictly an Irish folk song; it's actually an English ballad set to the tune of the Irish song Londonderry Air. It's been done to death, it has to be said, and it's difficult to pick a favourite version. But when has Johnny Cash ever let us down with a cover? This 1965 version from Cash's Orange Blossom Special is one of the greats.

Probably the most infectious and amusing tune on this list, Seven Drunken Nights is the perfect St. Patrick's Day tune. We are particularly fond of the version done by Chicago Celtic punk band The Tossers. It's from their live album Gloatin' and Showboatin', and live versions are always better than studio versions. 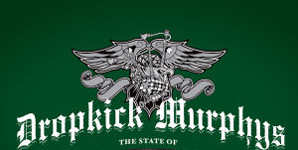