By Alastair Thompson on 15 September 2010

Review of Generation Hexed Album by Drums Of Death

There is not much worth shouting about that comes out of Scotland these days. So when an album by a Scottish artist does get signed it is usually followed by an over the top furore that makes them temporarily more famous than Ally McCoist before they disappear back into the Highlands never to be heard from again. Remember KT Tunstall, Franz Ferdinand? Exactly. 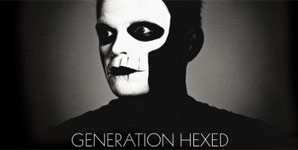 Mylo gave the world his electronic music for the masses in 2004 but has anyone heard from him since? Then came Calvin 'I made it in my mums bedroom' Harris to take things a stage further with lyrics cheesier than a David Guetta cheeseboard. So, with his musical heritage assured, step forward Drums of Death a.k.a. Colin Bailey and no, this isn't to be confused with Corinne Bailey Rae. She's a woman from Leeds, completely different see.

The male Colin Bailey hails from a small fishing village on the west coast of Scotland before he promptly moved to Glasgow and found both hardcore and punk scenes to immerse himself in. Incidentally one of his bezza's is none other than Peaches (the real one not the Geldolf one) though it wasn't until he made it to London town that Bailey started experimenting with solo electronic projects.

Whilst production is simple throughout - we're not talking about multi-layers here - it is intelligent in ensuring wide appeal by taking influences from all sides whilst steadfastly holding onto pop throughout. There's piano riffs, acid house, instrumental and in between with Hot Chip's influence clear all the way through. The standout tracks are without doubt 'Lonely Days' and 'London Teeth'. The latter's looped-synth is pure 90's and, whilst nothing new, it builds nicely for a 2-minute rave of smiley faces and white gloves. 'Lonely Days,' in contrast, takes a much darker route with a warped speed garage bassline proving filthier than a battered mars bar found on the floor of a Glasgow public toilet.

'Creak' is a huge disappointment. A dark and moody tech beat, the synth that comes over the top is sinister as it sways back and forth, before the beat is turned up against it for what is a powerful brooding sound. Just over a minute and a half in though, Bailey brings in these daft bleeps from a dated 80's computer game and all the emotion is lost. A complete waste. 'Won't Be Long' is an all encompassing old skool (the irony of spelling school wrong will never be lost on me) number that will undoubtedly be a big tune live but on record it is dominated by Bailey's dreadful voice.

Ah, the voice. Perhaps I should have mentioned this earlier. Naming track one, 'Karaoke' couldn't have been more apt for a man with a voice flatter than Simon Cowell's head with an encyclopaedia on it. It's a real shame that at no point from early performances to his allegiance with the Berlin-based Greco-Roman label through to release that no one has mentioned this to him. 'This is pop music on my terms', Bailey has been quoted as saying. It's a shame because if he'd stayed behind the mixing desk and paid for some guest vocalists then this could've been a decent pop record. As it is, it's a bit shit.