Review of Shallow Bed Album by Dry the River

Listen up everyone, this year's Mumford equivalent have made themselves known. Okay, okay that might not be an entirely correct statement, but it makes sense, on a par with the many other inter-band references that have naturally sprung up to begin 2012. Dry The River haven't been under this 'hype' bracket for nothing. 'Hype' being the forever clichéd word that never seems to panic the band, only the fearing gaggle of fans that intend to call the band their 'own' for as long as they can. The London five-piece have been around for a while, perfecting this debut seeming to top their list of priorities, obviously all paying off when they were nominated for BBC's Sound of 2012 and finishing this very awaited offering. 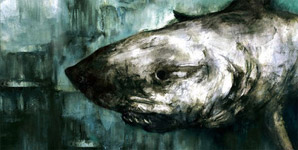 'New Ceremony' starts with the delicate plucks of the brittle strings in true folk fashion and with a trusty environmental reference chucked in there. In this case it's the 'shipping forecast.' A similarity to the Mumford massive's prior mention to the 'harvest' and their generally wholesome vocab. Somewhere turbulence overrides and a more rock side suffices into something that bares an uncanny resemblance to a solo Brandon Flowers' one hit wonder 'Crossfire.' It slots in to place rather well, showing that they just like to copy other bands. Just kidding, that is arguably one of the better songs on the record and they have managed to make it sound like a DTR song. An eerie presence is felt in 'Bible Belt' and 'Demons' with the soft reoccurrence of Peter Liddle's distinct vocal range speaking 'day in and day out', breezing through the rippled concoction of the epic atmosphere created within.

This album is surprisingly chilled, even in its louder sections and also is a beautiful listen. There's a lot of range but with that some tracks do seem a little dragged out. 'The Chambers & The Vales' is upbeat from the off with romantic imagery of 'two young hearts' meeting, musing over the faster riff and the bigger production alerting us here. Dry the River's previous singles sum up the band as a collective and what they are trying to get through to everyone music wise. The honest words, 'I loved you in best way possible', ring through 'No Rest', giving emphasis to the crashing instruments, but only after the gentle verse to lure you in to the rest. 'Weights and Measures' follows the similar structure, obviously their forte and is similar to what Biffy Clyro have done in the past. It does create magnificence and proven to present raw talent.

For a debut, this is very good. Dry The River have finally come to the surface after a few years of many a music lover's mumbled words about them. They're out in the open waters now, ready for whatever may come their way as a result of this record. We'll just have to wait and see whether this shallow bed finally fills up with success. 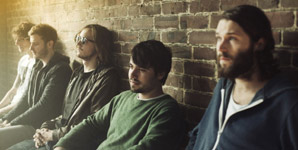