Duran Duran - All You Need Is Now Album Review

Review of All You Need Is Now Album by Duran Duran

You have to feel sorry for Simon Le Bon - well, ok may be sorry is bit of a stretch, but how about concerned then. I make this somewhat dubious statement because whilst the Duran Duran front man probably hasn't used public transport since about 1980 and slooshes with Cristal, one thing he can't be accused of being is a bandwagon jumper. Doubtless he's watched with a sardonic grin as the band's contemporaries from their time at the apex of pop have reformed one-by-one, fed by the eighties nostalgia gravy train, all the while knowing that despite line up changes aplenty, he and his fellow perpetrators of some of the era's classic moments have never really been away. 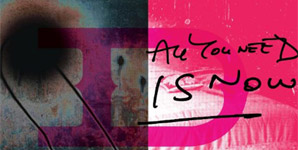 At times the going has been less than serene. Post-heyday, 1997's Medazzaland failed to even get a UK release, and an ill-advised cover of Public Enemy's '911 Is A Joke' is still widely regarded as one of the worst ever attempted. Steady if unspectacular sales have been the order of the day since 1988's Big Thing, and after latterly parting company with Epic, All You Need Is Now finds itself released on the band's own Tape Modern label.

They aren't done yet however, far from it. Fairy-dust sprinkling producer and newish best chum Mark Ronson has been brought in to reconnect the almost classic line up (Andy Taylor returned but left again in 2006) to our consciousness again, with both Kelis and Ana Matronic also guesting. It's also fair to say that anyone labouring under the impression that a little thing like having to self release would put a dent into the group's legendary ego is in for a rather nasty surprise however - all the qualities which made you either cheer or choke at just the mention of their name are still here in spades.

Those in the camp that regard the whole Duran Duran brand as rancid old kryptonite will gloatingly point out that Le Bon's voice still sounds perpetually like it's trying to find the right note, and retains its two principal settings, namely epic croak and cat-squawk overwroughtness. If they liked that, they'll love The Man Who Stole A Leopard, a song so full of pretension that even the RSPCA will have to consider taking action. And to add to that there's always of course the prevasive icky feeling that the supermodels which they're still continually trying to seduce in many of their songs are probably about the same age these days as their own daughters.

Potentially long suffering loyal fans will however feel vindicated that they kept the faith. The titular opener is more of a statement of intent than anything, a bombastic call to arms assembled from huge drums and klaxon like synths, before melting into a chorus of neatly romanticised guitar spaghetti chorus. It's a reminder that after all these are the people who brought us The Reflex, Girls on Film and Hungry Like the Wolf amongst a tasty list of others, and the neatly clipped Being Followed arrives as if just cryogenically unfrozen from the Rio period, complete with choppy funk-lite guitar and waves of tousle-haired, glossy finish.

Astute and a keen observer, you sense Ronson is deftly at work behind the scenes during the best moments, striking a perfect balance between history and progress. His touch means that Runaway Runaway, Too Bad You're So Beautiful and Girl Panic are all heavy on the big is beautiful lines of post new romanticism, whilst Safe (In The Heat Of The Moment) is a deadringer for fab four/five during their cod-soul drenched Nile Rodgers period.

Usually for bands in this position the question posed is whether or not new work will recruit new fans. Duran Duran of course already have plenty of modern disciples - Brandon Flowers, White Lies and Friendly Fires to name a few - enough you guess to suggest that still bothering about critical opinion is another outfit's problem. On this evidence they should care however; they're far from mere caricatures of themselves in the glory years, as the vast majority of All You Need is Now proves. How long the decade that spawned them will remain such a cultural touchstone is unclear, but the good news is that for Simon Le Bon and friends the answer to that riddle isn't even vaguely important.