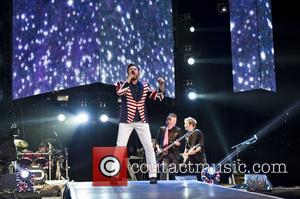 British artists Duran Duran, Snow Patrol, Stereophonics and Paolo Nutini took to the stage in London on Friday night (27Jul12) to play a massive gig to mark the opening of the 2012 Olympic Games.
The concert in Hyde Park was scheduled to coincide with the opening ceremony, with the four acts representing each of the countries which make up the British Isles.
Singer/songwriter Nutini, who represented his native Scotland, opened the show and played beneath a giant screen showing his country's flag, before pop stars Duran Duran took to the stage to represent England.
Frontman Simon Le Bon wore a Union Jack-style jacket for the occasion and the highlight of the set came when aerobatic stunt team the Red Arrows carried out a fly past during a performance of hit track The Reflex.
The gig was then halted for an hour-long break, during which scenes from the opening ceremony were broadcast live from the Olympic Stadium in Stratford and beamed onto the big screen above the stage before Welsh rockers Stereophonics performed.
The show was closed by Snow Patrol, representing Northern Ireland, and as they broke into their hit Chasing Cars, the crowd cheered as screens showed Great Britain's Olympic team walking into the stadium.
Another gig to mark the closing of the Games will be headlined by British rockers Blur on 12 August (12).