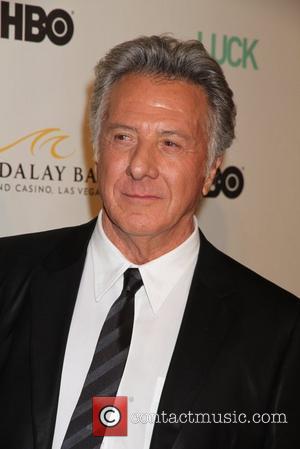 Dustin Hoffman says he was as surprised as anyone to find himself back on television, and admits he was warned to stay on the big-screen. The Hollywood actor appears in the new Michael Mann horse-racing series 'Luck' on HBO.
Speaking to the Los Angeles Times, Hoffman recalled how his friends and colleagues were not optimistic about the venture, saying, "People said, 'Oh, no, you're into television! It causes divorce, it maims people physically; you knock out so many pages a day.." The show was renewed for a second series immediately following the airing of its first episode in January 2012, and the majority of reviews highlighted Hoffman's excellent acting in particular. The star says he has an interest in the idea of 'character' in real-life, saying, "If you go into a restaurant, every single person there has a three-dimensional life - there's people with divorces, with cancer.There's barely a table in the place without a long story. And that's what this piece does. I was so aware of that - whether it's Nick Nolte, the Irish jockey or the degenerates". Hoffman has played some of the most distinctive and memorable characters in cinema history and it all began in 1967, when he landed the lead-role in 'The Graduate' and became an overnight-sensation.
'Luck', also starring Dennis Farina and Nick Nolte, follows numerous characters who all intricately tied to the same horse-racing track.