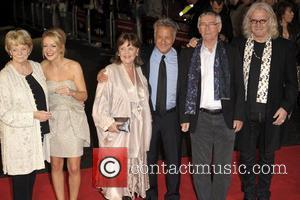 Dustin Hoffman had to wipe away the tears as he spoke at a British Academy of Film & Television event last night (October 16, 2012). Hoffman was at an invite-only event at the HQ of BAFTA, and started recounting some of the harder tales from his 30 years in the business.

Talking about landing the role for 'Kramer Vs. Kramer' in 1980, Hoffman commented "I was getting divorced, I'd been partying with drugs and it depleted me in every way." His voice then began to crack as he explained that he didn't want to meet with the producer Stanley Jaffe and director and writer Bob Benton because he didn't like the script. "Your script has no feeling of what I'm going through," Hoffman said as he remembered the emotional turmoil of his breakup and divorce. He explained further that "for whatever reasons you just end up not being able to inhabit the same space," referencing the break-up from first wife Anne Byrne.

Hoffman also recalled how he was tempted to quit after being given bad reviews for 'The Graduate', though other stories took on a prouder stance, with the actor remembering the time he turned the at-the-time hot property Katie Jackson for relative unknown Meryl Streep in 'Kramer Vs. Kramer'. The talk covered most of the star's career, including recent films like 'Meet The Fockers'.