The Rock and Ronda Rousey shock Triple H at WrestleMania

DWAYNE 'THE ROCK' JOHNSON and UFC champion Ronda Rousey made a surprise appearance together at 'WWE WrestleMania 31' at Levi's Stadium in Santa Clara, California, on Sunday night (29.03.15) with the UFC Champion stepping into the ring to fight Stephanie McMahon. 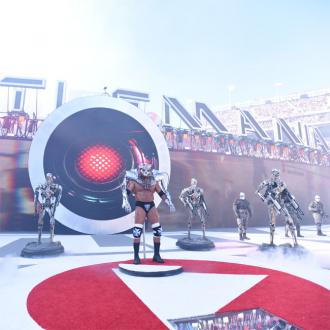 DWAYNE 'THE ROCK' JOHNSON and UFC champion Ronda Rousey made a surprise appearance together at 'WrestleMania 31' on Sunday night (29.03.15).

The WWE Superstar-turned-actor shocked the sell-out crowd at Levi's Stadium in Santa Clara, California, when he interrupted Triple H and his wife Stephanie McMahon as the couple mocked fans.

The Rock decided he'd heard enough and challenged Triple H to create a ''WrestleMania moment'' and fight him, a challenge he refused to accept.

After The Rock mocked Triple H for not having the guts take him on, Stephanie launched a barrage of insults at the 'Furious 7' actor and insisted without her and her father Vince McMahon - the WWE Chairman and CEO - he would not be a star.

She taunted ''without the McMahons there would be no Rock'' and then she slapped him across the face and shouted: ''What are you going to do, hit a woman?''

The Rock then went and fetched UFC Women's Bantamweight Champion Ronda, who was watching at ringside, to help him.

Initially Stephanie, 38, refused to back down and tried to imply she and Ronda, 28, were friends, but she then lost her temper and screamed at 'The Expendables 3' star to ''get the hell out of my ring''.

That prompted the MMA fighter to respond, saying: ''Any ring I step into is mine. If you want me to leave, how about you make me?''

The face-off then erupted with The Rock raining blows on Triple H who was then judo tossed out of the ring by Ronda.

In retaliation, Stephanie attempted to slap Ronda but her attack was blocked and the UFC queen then put her in an arm bar leaving Stephanie screaming in agony.

Ronda then celebrated in the ring with The Rock as the 76,976 fans in attendance cheered wildly and chanted ''Ronda Rousey''.

Elsewhere, Arnold Schwarzenegger came out with several other wrestlers to celebrate his induction into the WWE Hall of Fame on Saturday (28.03.15).

His new film 'Terminator Genisys' was also the inspiration for Triple H's entrance ahead of his match with Sting, with the action legend appearing in character as the T-800 cyborg in a video segment.

During the epic battle, Hulk Hogan made a surprise appearance with his nWo stable mates, 'Magic Mike' star Kevin Nash and Scott Hall - both WWE Hall of Famers - to help Sting as he came under attack from rival wrestling group DX.

But their efforts to help failed as Sting was defeated by Triple H after being struck with a sledgehammer.