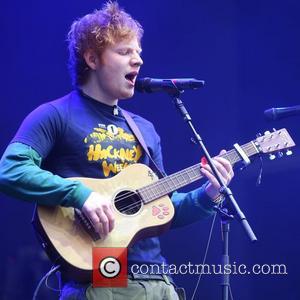 Fans of British singer/songwriter Ed Sheeran have angered Pink Floyd's loyal devotees after failing to realise his performance of the rockers' classic tune Wish You Were Here at the London Olympics Closing Ceremony was a cover.
Sheeran's following mistakenly thought the track he sang at the 2012 Games extravaganza was a new piece by The A Team hitmaker, and their lack of musical knowledge has upset Pink Floyd's longtime fanbase, with many members complaining directly to the group's drummer Nick Mason, who backed the newcomer onstage at the big gig.
Mason has since written an email to Sheeran to thank him for the opportunity, while he also took the chance to address the fan controversy and expressed his hope that, upon learning Wish You Were Here was a Pink Floyd original, fans would check out the iconic group's back catalogue.
He writes, "Hi Ed, Really great experience, many thanks for a great performance. And a great day out!
"Following a bit of post show stuff with some of the PF fans getting outraged at people not realising the song was not your new release, I just wanted to go on record to suggest they chill on this. As far as I'm concerned what you did was a really great version of the song, and its (sic) one of the nicest tributes to have any artist choose to play another's work, particularly an artist whose (sic) a great song writer in his own right...
"Sooner or later people will work out the origin of the song, and who knows, maybe check out our catalogue, just as hopefully our fans might check out yours. Music doesn't have to be entirely partisan - Or if it does, no one bothered to tell me..."
Sheeran posted the note on his Twitter.com blog on Thursday (16Aug12) and later added, "Hopefully that clears some stuff up. Nick is a top lad and a legend. Was a massive honour to play that song with him."
Sheeran's Olympics appearance with Mason also hit headlines before last weekend's (12Aug12) gig itself after he suggested all three existing members of the rock supergroup would be joining him for the Closing Ceremony - only for a Pink Floyd representative to shoot down the claims.