Ed Sheeran film 'Jumpers for Goalposts' in cinemas next month

Ed Sheeran announces his first concert film 'Jumpers for Goalposts', which he is gearing up for a special cinema event held next month. 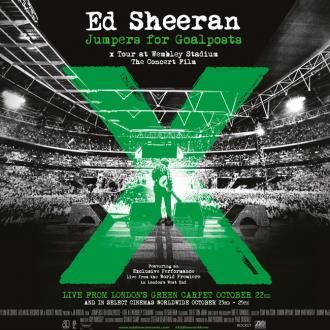 Ed Sheeran is to release his first concert film 'Jumpers for Goalposts' next month.

A special cinema event will take place on Thursday (22.10.15) and will be broadcast live via satellite in cinemas around the globe from the world premiere on London's Leicester Square, which will include an exclusive live performance from the 'Thinking Out Loud' hitmaker with the film being screened in full.

'Jumpers for Goalposts' will feature performances from the biggest shows of his career, including a sold out Wembley Stadium gig in July 2015 where he performed to 80,000 fans playing his hits including 'The A Team', 'Sing' and 'Don't' - and a surprise duet from Sir Elton John.

The film will tell the story of Ed's triumphant journey and will give fans a chance to see behind the scenes of one of the biggest-selling pop artists of all time and the people around him.

The multi-award-winning musician announced the news on Thursday morning (17.09.15) via Twitter and teased fans by saying he had something to reveal.

Tickets for local participating cinemas will begin to go on sale from Thursday September 24 at www.edsheeranmovie.com.