Ed Sheeran has got a lion tattooed across his chest by celebrity tattoo artist Kevin Paul. 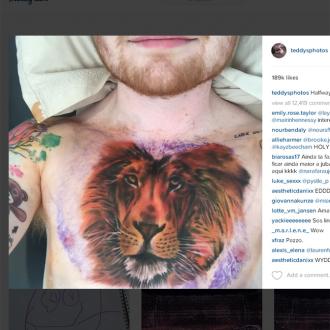 Ed Sheeran has got a lion tattooed across his entire chest.

The 25-year-old singer has had an image of the king of the jungle inked across his body, hinting the huge design is set to get bigger by insisting it is only half-completed.

Posting a photo of the mammoth tattoo on Instagram, he wrote: ''Halfway and ouch (sic).''

Later on, Ed tweeted confirming celebrity tattoo artist Kevin Paul had worked on the intricate design and thanked him for dealing with his moaning, although Kevin insisted he had loved doing the tattoo and was excited about completing it at a later date.

He wrote: ''Lion is courtesy of @kp_est78, who puts up with me complaining about the pain (sic).''

The big cat design is just the latest in a long line of eclectic tattoos which the 'Thinking Out Loud' hitmaker has had permanently drawn onto his skin, with others such as cartoon character Pingu, a paw print and a snowflake scattered across his body.

And just last month, boy band Rixton revealed they got tongue-in-cheek matching tattoos reading ''Ladz On Tour'' with Ed, after completing a string of shows with him.

Frontman Jake Roche said: ''It sounds ridiculous but it's because we're the opposite of lads.