Ed Sheeran is worried he won't win anything at tonight's (21.02.12) Brit Awards - even though he is nominated fro four prizes - because there's so much talented competition. 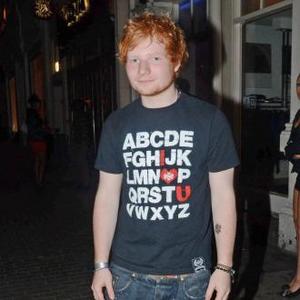 The 21-year-old singer is up for Best Album, Best Single, Best Breakthrough Act and Best Male, but is not taking anything for granted because he knows he's up against a host of talented competition.

He said: ''There is a lot of good competition. I have a feeling Adele will win the album prize and One Direction will get Best Single. Then it will be a toss-up between me and Noel Gallagher for Male and between me and Jessie J for Best Breakthrough. It's hard to rate my chances.''

And despite being one of the main attractions at London's The O2 for tonight's glitzy ceremony, Ed says there'll be no diva-like behaviour from him.

He told The Sun newspaper: ''I'll be arriving in a mini-van with my crew basically. I'm not the kind of person who would turn up in a limo or be bling-tastic. I'm only wearing a designer suit to the awards because my mum and dad are going and they will want me to look nice.

''My parents are excited. They've not been drinking so they can slim down into their desired clothes.

''I'm also taking Jake Gosling who made the record with me. And three of my best mates. Two of whose sofas I lived on for about a year. It'll be nice to reward them. And it's a reward for them to enjoy the free booze. I don't drink so I might bring a bottle of squash with me.''