Ed Sheeran ''loved'' working with Taylor Swift on a track for her forthcoming new album 'Red'. 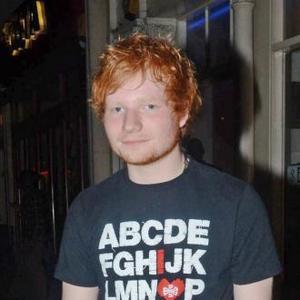 The 'Lego House' hitmaker teamed up with the blonde beauty to record a duet for the 22-year-old singer's forthcoming new album 'Red', and the flame-haired star ''can't wait'' for fans to hear the result of their hard work.

Speaking in the Virgin Media Louder Lounge at the V Festival in Chelmsford, Essex, he exclusively told BANG Showbiz: ''I loved working with Taylor, it was such a great experience.

''She's a really nice girl. I can't wait for everyone to hear her new album.''

Taylor and Ed recorded their forthcoming duet while bouncing on a trampoline and the country singer counts the 'A Team' singer as one of her ''favourite people''.

She explained: ''Ed Sheeran is one of my favourite people in the world.

''He's so cool and he's such a great artist. We wrote a song while sitting on a trampoline that we loved so much that we ended up recording it as a duet.''

As well as working with Ed, Taylor - whose last album was 2010's 'Speak Now' - teamed up with a number of her favourite songwriters to record 'Red', which will feature 16 tracks and is inspired by a number of her past relationships.

She explained: '''Speak Now', I wrote it completely on my own and I didn't have any co-writers and you know, that was an amazing way to make a record and I was really proud of it.

''But when it came to approaching this album I really wanted to go back to the drawing board and think about a different way to approach it.''