British Pop Star Ed Sheeran Gave An Inspiring Talk To Those Who Suffer With A Stammer On Monday Night (08jun15) As He Was Honoured For Overcoming The Speech Impediment. 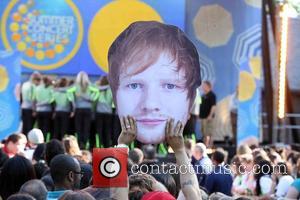 The Thinking Out Loud hitmaker developed a stutter after undergoing laser surgery to remove a birthmark during his childhood, and he was named an honouree at the American Institute for Stuttering's Freeing Voices Changing Lives Benefit Gala in New York.

During the fundraiser, hosted by actress Emily Blunt, who also had a stammer as a youngster, Sheeran told the audience to embrace their quirks rather worry about being different.

He said, "Stuttering is not a thing you have to be worried about at all. Even if you have quirks and weirdness, you shouldn't be worried about that... The people I went to school with that were the most normal and were the coolest when we grew up - I was telling Emily earlier that one of the cool kids from school now does my plumbing! That's a fact!

"If you try to be the cool kid in class, you'll end up very boring and doing plumbing for someone who apparently wasn't that cool. Be yourself. Embrace your quirks. Being weird is a wonderful thing... Embrace your weirdness... From a stuttering point of view, don't treat it as an issue. Work through it and get the treatment you want to get, but don't ever see it as a plight on your life (sic). Carry on pushing forward."