Ed Sheeran has revealed he overcame a stutter as a child by learning all of the words to rapper Eminem's seminal album 'The Marshall Mathers LP'. 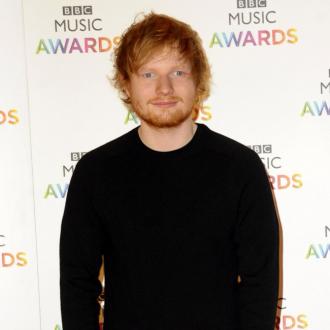 Ed Sheeran overcame a stutter thanks to Eminem.

The 'Bloodstream' singer revealed he developed the speech disorder as a child, but managed to get rid of it by listening to the rapper's seminal album 'The Marshall Mathers LP' and learning all of the words.

He explained: ''I had a port-wine stain birthmark on my face that I got lasered off when I was very young; one day, they forgot to put the anaesthetic on, and ever since then, I had a stutter.

''My Uncle Jim told my dad that Eminem was the next Bob Dylan - it's pretty similar, it's all just storytelling - so my dad bought me The Marshall Mathers LP when I was 9 years old, not knowing what was on it. I learned every word of it, back to front, by the time I was 10. He raps very fast and melodically and percussively, and it helped me get rid of the stutter.''

The 24-year-old musician continued to say he believes young people should embrace their ''quirks and weirdness'' because although he was a ''very weird child'', he thinks the stranger children go on to have more success.

Speaking at the American Institute for Stuttering's Freeing Voices Live Benefit Gala, he said: ''I was a very, very weird child ... Even if you have quirks and weirdness, you shouldn't be worried about that ... One of the cool kids from school now does my plumbing! That's a fact!

''If you try to be the cool kid in class, you'll end up very boring and doing plumbing for someone who apparently wasn't that cool. Be yourself. Embrace your quirks. Being weird is a wonderful thing ... I have a f***ing football team now, that's pretty cool!''