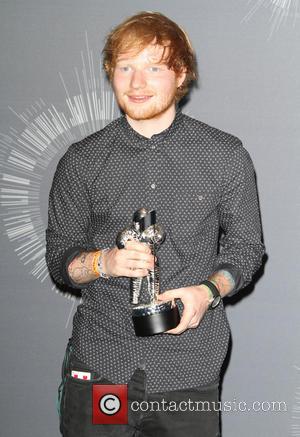 Ed Sheeran is hoping to help One Direction score another big pop hit by writing a new tune for them, even though one of the boy band members stole his girlfriend.

Rumours persist that Sheeran's song Don't is about Ellie Goulding's fling with One Direction's Niall Horan, which took place in the same hotel Sheeran was staying in, after the red head recently told radio host Howard Stern his ex was unfaithful with a member of the group.

The Lego House singer told Stern that he and his One Direction foe were not on speaking terms after the love triangle mess, but now it seems he's forgiven his pal - Sheeran and Horan were spotted dancing and palling around at the iHeartRadio festival in Las Vegas over the weekend (20Sep14).

And now Sheeran has revealed he wrote a song for One Direction, which appears on the group's new release Four.

He tells Australia's Nova Fm radio host Kent Small, "I wasn't going to do it again because my record label got very annoyed that my first number one was a song I gave to somebody else and they were like, 'Don't do it'.

"But I did (Tv show) Britain's Got Talent and (One Direction mentor) Simon Cowell... mentioned it... and then the next day I was in Copenhagen and I just got an idea and I went in the shower room, where it's big and reverberative (sic) and wrote it and I was like, 'That sounds like a song that would be perfect for them', and sent it across.

"It's one of these songs that I wouldn't have used for myself; it was written specifically for them."