Ed Sheeran has admitted the lion tattoo he got on his chest was fake. 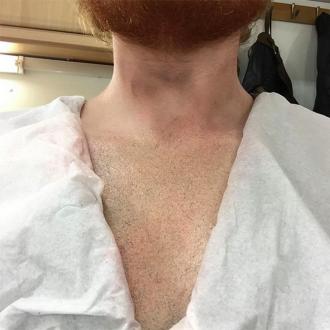 The 'Thinking Out Loud' hitmaker shocked fans when he tweeted a picture of a rather large image of the big cat tattooed on his chest earlier this month, though he has now revealed it was all just a big joke.

Taking a photo of his bare chest, he captioned it: ''Was only joking about the lion (sic)''

And fans were clearly pleased by the news, with one writing: ''Ohmg!!! You had me fooled (sic)''

Another added: ''ED YOU SHOULD HAVE SAID 'was only lion about the lion' you missed such an amazing opportunity (sic)''

However, some of his supporters are questioning whether he has told a second lie, noting that the picture of his bare 'chest' looks more like his back.

Whilst another said: ''I'm analysing it - doesn't look like his chest (sic)''

If Ed was lying about getting the large tattoo, he proved he is good at telling tales after previously coming to the defence of the colourful inking.

He said: ''All this kerfuffle over a tattoo. If it was black and white, saying a clever phrase in a language I can't speak, no-one would've said anything.

''It's not the first weird tattoo I've got and it won't be the last, but I like all of them.''