Ed Sheeran Showed Off His Comedy Skills When He Joined The Cast Of U.s. Tv Comedy Undateable For An Hour-long Live Show On Tuesday (05apr15). 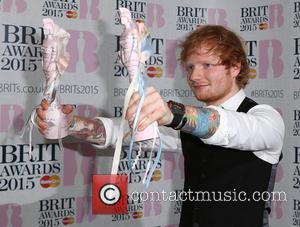 Picture: Ed Sheeran - Shots of the winners from the 2015 The Brit Awards which were held at the O2 arena in London, United Kingdom -...

The episode began with the British singer/songwriter being asked to unplug and get offstage during an open mic night at the Detroit, Michigan bar run by Brent Morin's character Justin and ended with him kissing Morin on the lips and then performing a rendition of Britney Spears' ...Baby One More Time with special guest Victoria Justice and show regular Bridgit Mendler.