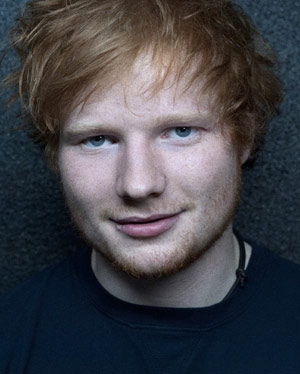 2011's UK breakthrough star Ed Sheeran has announced details of his next UK tour, set to take place in October/November 2012. The run of dates will kick off at London's Hammersmith Apollo on October 15, followed by shows in Newport, Bournemouth, Plymouth, Birmingham, Nottingham, Manchester, Doncaster, Hull, Blackpool, Newcastle and Edinburgh, before finishing up at Glasgow's Barrowlands on November 14.

The Suffolk-raised 20-year-old released his acclaimed debut album '+' in September 2011 and he hasn't looked back since. The album, which is now triple platinum with over 900,000 sales, debuted at #1 in the official UK charts upon release and reclaimed the #1 title at the turn of the year. Furthermore, Ed has received the most amount of BRIT Awards nominations this year, for 'Best Male', 'Best Breakthrough', 'Best Single', and 'Best Album' , with the ceremony taking place at London's O2 Arena on February 21st. In addition to this, Ed received nods from iTunes ('Best Newcomer 2011'), BT Digital Music Awards ('Breakthrough Artist of the Year'), BBC Radio 1 Teen Awards ('Best British Single') and Q Awards ('Breakthrough Artist').

Last year saw the release of the massive UK top 5 singles, 'The A Team', 'You Need Me, I Don't Need You' and 'Lego House'. No doubt the "flame-haired guitar genius" will continue this trend when he releases his new single 'Drunk' on February 27th.

Tickets go on sale Wednesday 25th Jan at 9am