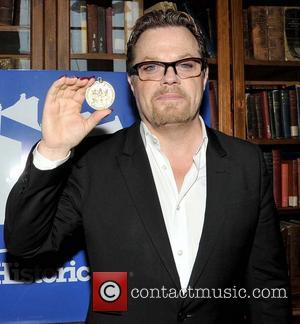 Funnyman Eddie Izzard was warned he could die if he continued his attempt to run 27 marathons in as many days in tribute to Nelson Mandela.

The British star challenged himself to the endurance feat last year (12) to honour the former South African leader, who spent 27 years in prison before being released in 1990.

However, Izzard pulled out of the exhausting stunt after just four days when he suffered an adverse reaction to prescription drug medication.

Now the comedian/actor has opened up about his health woes on the trek in South Africa, revealing he was warned he could have died if he had continued running.

Izzard tells the May issue of Reader's Digest, "It just went wrong... I was peeing pee that got darker and darker, up to Coca-Cola colour. I thought it was the vitamin supplements I was taking. So when I agreed to go to the doctor and get checked up, I thought he'd give me something and I'd be back on the road the next day. Instead, he said, 'You go straight into hospital.'

"That threw me. I started working out the maths of whether I'd be able to complete the marathons. I thought, If we miss out one marathon I can do two in one day. Then I had to take a second day off, then a third... I've been told since that if I'd continued it could have killed me. But I wasn't feeling that as I ran. Apparently, you just carry on and then you drop dead. There you go."