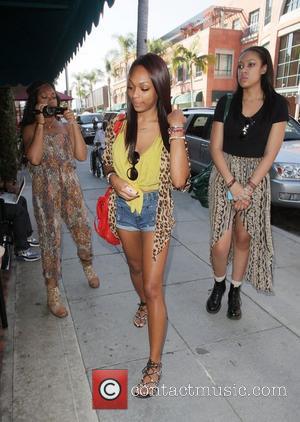 Picture: Eddie Murphy's daughter, Shayne Murphy seen helping out a gentleman in a wheelchair before going into Beverly Hills Nail Design with a friend. Los Angeles,...

Good news for Eddie Murphy fans - of which we fear there may well be a dwindling amount - he's not dead! Confused? Well, the comic actor has once again been the subject of a death rumour, not the first in his career, after Twitter erupted with the news that he'd been involved in a snowboarding accident whilst out on the slopes in Zermatt, Switzerland.
It's the third time in as many months that the internet has been humming to the news that Murphy has snuffed it, and you might forgive the actor for being indignant at the recurring suggestion. Everyone knows it's only his career that might need bringing back to life.
The funny man is physically doing just fine, although he may be struggling to come to terms still with the box office flop of his latest film 'A Thousand Words' which only took $18 million in March. The rumour has come, according to E! Online, from notorious pranksters the Global Associated News, who've also claimed the demise of Jeff Goldblum after falling off a cliff in New Zealand whilst Adam Sandler, Charlie Sheen and Ryan Gosling have all at one time or another met a similar fate to Murphy and had mishaps on the Swiss or Austrian Alps. Except they didn't, remember. And neither did Murphy.