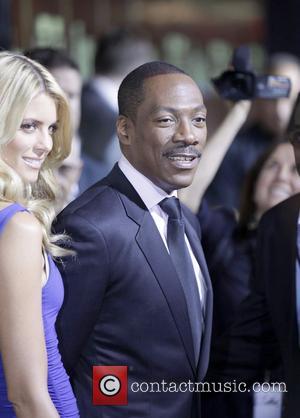 Eddie Murphy was honoured by his peers for his outstanding contribution to film, TV, music and stand-up over his 30 + year career.

Chris Rock, Jamie Foxx, Adam Sandler, and Russell Brand were just some of the famous faces at the Beverley Hills gala being aired on Spike later this month (it airs Nov. 14 at 10 p.m. on Spike). Murphy's friends and co-stars had nothing but praise for Murphy, with his appearances on such comedy classics as Coming To America and The Beverley Hills Cop being recalled by co-stars Arsenio Hall and Judge Reinhold. Jeffrey Katzenberg of Dreamworks Animation also gave his heart to Murphy's Donkey character from the Shrek films, whilst his Life co-star, Martin Lawrence, told him from onstage, “You’ve got a friend for life."

There were also video highlights from the funny man's seminal stand-up performances from the 80's, Raw and Delirious, although despite much attempted persuasion Murphy declined to get back on stage and perform stand up again.

However, Murphy did give a performance on stage of a different variety, donning a pair of sunglasses and joining Stevie Wonder on stage for a rendition of 'Superstition', with The Roots as the backing group.

Eddie ended the night with a speech of his own, telling the audience: “You know what this is like? You ever have somebody sing ‘Happy Birthday’ to you, but for like two hours? ‘Eddie, you’re so wonderful. Eddie, Eddie, Eddie. I am Eddie-d out. I don’t know how you all must feel.”

As his career approaches decade 40, we doubt that too many people are Eddie-d out just yet.