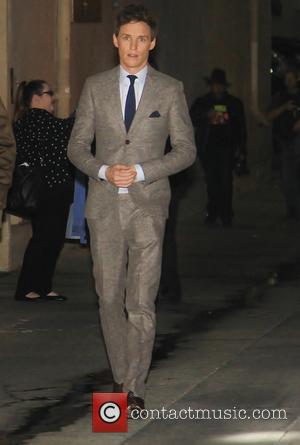 Picture: Shots of British film actor Eddie Redmayne, who was nominated for an Oscar for his role in the Stephen Hawking biography 'The Theory of Everything'...

Oscar nominee Eddie Redmayne was terrified while shooting his first Hollywood movie with Robert De Niro behind the camera - and he's convinced it shows on film.

The Theory of Everything star was in his early 20s when he landed a role opposite Angelina Jolie and Matt Damon in The Good Shepherd and insists the only reason he wasn't fired is because his character is supposed to look frightened.

Just before picking up his latest accolade - the Cinema Vanguard Award at the Santa Barbara International Film Festival in California on Thursday (29Jan15) - he told Wenn, "Suddenly I'm flying across the Atlantic and staying at hotels in New York and being taken to work in Suvs with blacked out windows. I arrived at the studio and there's Angelina Jolie and Matt Damon and there's tons of paparazzi outside.

"Everywhere I looked there was a famous person and suddenly there's a camera in my face and Robert De Niro behind it, going, 'And act!' I was so frightened basically of getting fired that when you watch the film I just look terrified! The character was meant to look terrified but not that terrified!"

Redmayne admits landing the movie role had more to do with his features than his talents, adding, "I auditioned for many months and in the end I basically got the job because I have big lips and I was playing Angelina Jolie's son!"